The Madrid-Barca Axis: Why Barcelona must be more than MSN

The Madrid-Barca Axis: Why Barcelona must be more than MSN 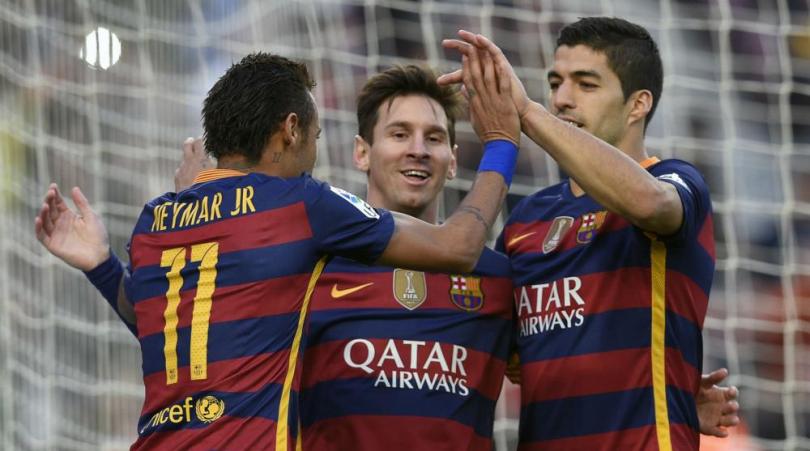 The truly great sporting teams throughout the ages have been remembered for their star performers; Pele, Cruyff, Maradona, Ronaldo and Zidane have all left their mark on great teams that they have achieved incredible victories with.

The current front three at Barcelona are as impressive a trio as any era has witnessed but their place in history is yet to be cemented and seems further away after the last few weeks.

Lionel Messi’s place in the pantheon of all-time greats is in no doubt and his heir apparent Neymar, still at only 25 years old, is within touching distance.

It seems churlish to pick out Luis Suarez as the weakest of the three but that is the reality when playing alongside such illustrious company.

Equipped with attacking options suggests that success would appear almost guaranteed. However, once again the value of the team game becomes apparent.

Seemingly every week on social media the superlatives churned out describing the relative successes of these three players would indicate that all is going exceedingly well in Catalonia currently, but a look at Barcelona’s recent form in the Champions League would suggest otherwise.

Heavy defeats in Paris and Turin have seen the expected departure of coach Luis Enrique finally confirmed and several of the regular starters are now fighting to remain at the club after what is to expected to be a busy summer at the Camp Nou.

The trouncing they received from PSG in Paris was startling. The capitulation and lack of fight was on display for the entire world to see.

With history needing to be made and then achieved in the return leg this setback was swiftly glossed over but last week in Turin the holes in the side became evident again.

Ironically it was seeing the balance that former Barcelona player Dani Alves brought to Juventus that highlighted yet again the fact that the club have not replaced the quality that was once there.

To also witness Jordi Alba on the bench rather than hurtling up the left wing left the side completely restricted to central zones and allowed Juventus to restrict their attacks.

When you also combine these factors with the absence of Sergio Busquets then the problem suddenly became a crisis.

None of the players playing instead of these three did anything particularly substandard but none of them executed their skillsets to the levels expected and needed in a game of that magnitude.

Having two quick and able fullbacks is essential with Barcelona’s tactics and initial set-up; with Messi and Neymar normally found on the touchlines further up the pitch and both unlikely to defend passed the halfway line the ability to get up and down the flank is vital in attack and defence.

The movement it creates for players to run into when going forward works in unison with the pace required to prevent wide counter attacks when defending.

In both aspects, it allows the side to stretch their players across the field of play.

Without Busquets, the side had nobody to retain possession and look for the easy pass.

Mascherano is a fine player in front of the back four but he lacks the positional discipline of Busquets and with Iniesta and Rakitic not at their usual high performance levels they were simply unable to cope with the blitz pressing that Juventus adopted (having seen PSG carry it out so effectively).

This tactic is not new on Barcelona, but with their current deficiencies it is not one that they seem capable of outmanoeuvring at any point soon.

Whoever the new head coach is to be at Barcelona they needn’t change too much.

The abilities of the front three and the desires to win big trophies and play in big games is unlikely to diminish after what looks like being a disappointing season.

What is needed though is investment in the right places.

A new right back is essential if the club is to challenge for major honours next season and more depth in midfield is required to help the aging Andres Iniesta.

Too often he is brought straight back from injury into a big knockout game and they cannot keep doing it if they are to prolong his career at this level.

Stability is a must

The margins at the elite level of any sport are always incredibly fine.

Barcelona are incredibly fortunate to have their MSN partnership in attack, but the platform that they are given to work on needs to be more stable.

The spine of the team (Pique, Busquets, Iniesta and Messi) remains strong, but the limbs have to provide more stability and quality on a consistent basis.