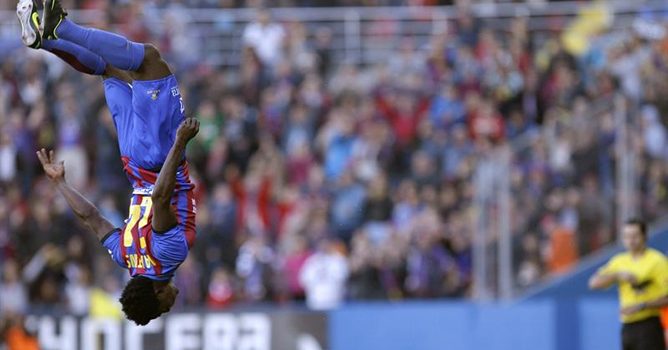 The 9th match-day of the 2012-2013 Liga BBVA has been completed and it has been another terrific week packed with outstanding goals. Currently Barcelona and Atletico both have 25 points from 9 games, but Barcelona have a superior points-difference and thus top the league.

Lionel Messi leads the race for the Pichichi with 13 goals followed closely by Ronaldo and Falcao on 11 and 10 goals respectively. Willy Caballero of Malaga has statistically been the best goalkeeper so far conceding only 5 goals in 9 matches.

I will as usual run down the 5 best matches of the weekend as well as providing my Team Of The Week and Player Of The Week.

Levante were overwhelming favorites heading into this fixture being 9 places above their rivals on the log before kick-off. Levante replaced arguably their best player of last season Kone with the Nigerian striker Obafemi Martins and it seems that this was some excellent business. Martins has been class for Levante and will help them in their attempt to gain Champions League Football next season.

Martins scored twice on his 28th birthday this weekend. His first came in the 12 minute and he doubled the lead with his second in the 61st minute. Winger Pedro Ríos scored the third for Levante in the 73rd minute. Granada got a consolation goal through El Arabi near the end of the match.

Levante dominated the match and were very deserving winners.

Sevilla have lost their third game of the season and maybe they should be worrying. Their form over their past 5 games is nothing to brag about and with the players that they have they should be getting much better results. I take nothing away from Zaragoza who on the day were a better side.

Zaragoza have been one of the most inconsistent sides in the league so far with 5 wins, 4 losses and no draws. Zaragoza definitely have a very good striker in the Portuguese Hélder Postiga. Their first goal came after he rounded the ‘keeper on the end of a very well executed solo run in the (insert) minute. Zaragoza doubled their lead when the defender Săpunaru scored a well placed header from a free-kick in the 45th minute.

Sevilla started a comeback in the 70th minute when Medel scored, they just unfortunately couldn’t complete the comeback and the match ended: Zaragoza 2-1 Sevilla.

Atletico have started their season phenomenally being unbeaten so far and some people believe that they are serious title contenders this season. You can’t deny that they are a very formidable team and with El Tigre leading their line they score loads of goals. Osasuna have not had as great a start to their season, but only a fool would underestimate them.

Atletico definitely played true to form and opened the scoring in the 31st minute through the Brazilian centre-back Miranda. They doubled the lead 4 minutes later when Raul Garcia guided the ball into the back of the net.

One of Osasuna’s best players so far, Lamah scored just before half-time to bring the deficit back to just one goal. The in-form striker in world football, Radamel Falcao, scored again in the 73rd minute and is making his worth to Atletico higher each time he gets a goal.

This result just shows that Atletico have the ambition and skill to go all the way. They just have to survive the January transfer window.

Barcelona have started their campaign brilliantly. They are undefeated and have only drawn one match. Tito Vilanova is beginning to get the best out of his players. The best example is Cesc Fabregas who was average for them last season, but has recently playing terrific football getting himself 7 assists.

It took longer than expected, but Barcelona opened the scoring in the 20th minute when Spanish striker David Villa netted. Messi lived up to reputation and scored the second in the 48th minute. After a couple of missed opportunities and a lot of passes Xavi scored Barca’s third in the 78th minute.

Two minutes later Cesc got his name on the score-sheet and the phenomenal little Argentine got his brace in the 89th minute to finish Rayo off.

This was an easy enough outcome to predict and it will take something special to stop this current Blaugrana team.

Real Madrid have definitely gotten their league effort back on track. After a shaky start Los Blancos look as impressive as ever and determined to decrease the gap that separates them from Barcelona and their local rivals Atletico.

Mallorca started very well, but it seems they are getting ready for a mid-table season. Their biggest problem has been discipline, the have received three straight red cards in their 9 games. Meaning they get a red every three games which is very worrying.

Real Madrid looked the better team from kick-off and kept running right through the Mallorca defense. Higuain opened the scoring with a well taken volley in the 8th minute. Cristiano Ronaldo scored the second in the 22nd minute after some calm passing on the edge of the Mallorca box.

Higuain got his second in the 70th minute and Ronaldo would not be bested getting his brace three minutes later. Substitute Jose Callejon scored the 5th on the 90 minute mark.

Real Madrid were impressive, but it was a terrible display by the entire Mallorca team.

Team Of The Week:

The Madrid captain had a good game and earned his clean-sheet. He made a couple of good saves that destroyed any hope of a Mallorca comeback.

Levante were more defensive than you would expect from a team that scored 3 goals and their solid back was mostly due to veteran left-back Juanfran Garcia who was very solid overall.

The Brazilian centre-back was very impressive in his sides win against Osasuna. His goal gave Atletico the confidence they needed to dominate the game.

The young French received a rare starting position in the Madrid XI and surely took his chance he was sublime and will be an amazing defender in the future.

Sapunaru was safe in defense, but what caught the eyes of the fans was his constant forward runs. He looked motivated and also scored his first goal for Zaragoza in just his sixth appearance for them.

Xavi presented another passing master-class this match-day. He barely misplaced a pass and pulled the strings, as we are so used to seeing him do, in one of the best mid-fields in the world. He scored a well taken goal that some would blame on the defense, but he definitely deserved it.

Provided a good opposite to Xavi’s calm passing by going forward more and presenting the ball to the outstanding forwards that they have. Also got himself a goal.

Cristiano scored in his 8th consecutive match this weekend. He just keeps getting better and better. He has started the season terrifically and will be striking terror into goalkeepers every single week.

The La Liga top scorer added to his tally with two goals against Rayo Vallecano. He has been exceptional as always and no one can dispute him as one of the best players of this week.

Higuain has been Madrids in-form striker over the last couple of matches and repaid Mourinho’s faith in him with two great goals. He has taken his starting chances while Benzema has been very unimpressive.

The Nigerian striker bagged a brace against Granada and has been a revelation for Levante ever since they signed him. He has certainly more than equaled his predecessor Kone.

He was spectacular and deserves the award for his terrific brace on his birth-day. He will surely be a huge part of their team this season.