Today’s Tales: Just like 1999? No, you were playing Middlesboro 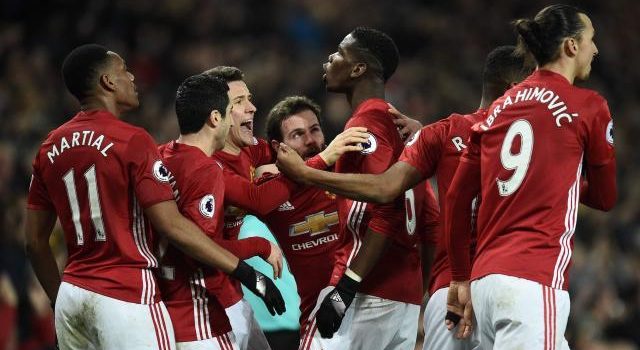 Today’s Tales: Just like 1999? No, you were playing Middlesboro

So Manchester United were a matter of minutes plus a Michael Carrick ice-cream away from a terrible end to 2016. But on the birthday of Sir Alex United rose once more to notch up their fifth straight win.

They were in 6th place when this run of victories commenced and now they are happy grazing in, well, 6th. Still, remember when the world got all carried away when Pep won five in a row? That seems like such a long time ago now, almost like a different year.

In Fergie’s time, and I don’t mean the last few minutes of a match, United would get any decision going at Old Trafford.

Those days are definitely gone as Zlatan had a goal ruled out through sheer stupidity and Martial should have been given a penalty for nearly having his ankle broken after a shot. But, United end 2016 happier than they started it, that’s for sure. The comeback had some people on social media enquiring as to whether it was 1999 all over again.

No mate, that was against Bayern in the Champions League final. This was at Old Trafford against a team only just promoted from the Championship.

The league leaders do seem to have the one thing that “proper football” people seem to love, and they have it in abundance. Of course I am talking about character.

Lesser teams, or teams with less character, would have folded when Stoke threatened to make a game of it at the Bridge.

Conte’s men are hungry and well drilled and surged again to open up the kind of daylight on New Year’s Day that suggests a title is coming their way. As for Stoke’s left back Eric Pieters, Victor Moses sent him so far the other way he has just celebrated New Year in 2011.

People can get excited that Chelsea conceded a whole two goals in one game, but there is no sign of a decline here. Move along.

Pep has work to do

Liverpool and City finished off 2016 with Klopp meeting Pep on, what some people claimed, was a level playing field. I have no idea what kind of pitches they played on in the Bundesliga, but hey.

If they mean a level playing field financially, said pundits clearly haven’t looked at the difference between the two clubs spending in the last five years.

Anyway, Liverpool won with keeps them “annoyingly” close to Chelsea. If six points back can be classed as annoying, that is. Raheem Sterling fell over in the 37th second and still hasn’t been seen since.

Pep has work to do, he might end up turning to Jesus.

Is anyone else finding the new bromance between Big Sam and Arsene a little off-putting? Also, another cause for concern is the size of Allardyce’s head on that Sky Sports graphic. He must struggle with jumpers, that’s all I can say.

Arsene said that each defeat left a scar on his heart, so I can’t imagine that the legendary Frenchman carries a donor card with what he’s been through in the last ten years. Still, his heart will have skipped a beat when he saw how Giroud wanted to start his year.

Forget Mhki’s scorpion, Oli saw that and raised the stakes somewhat. How so, United fans will probably question? Mhki’s was pulled off after the game was done and dusted. Giroud’s was in the heat of the battle.

It’s as simple as that for me. If Arsenal get into a decent run they’ll certainly finish in the European spots.

If my memory serves me correctly, Kane and Alli did something pretty good last January that got some of us all excited about Spurs and the knock on effect for England in the summer. That didn’t work out too well, so I am reserving judgement on what beating Watford 4-1 away from home means to the bigger picture.

Spurs played very well against the Mr Hyde version of Watford. Has there been a more inconsistent side recently?

Both sides played three at the back which proves the point that it doesn’t really matter what formation you play, if your players are still at their New Year’s Eve party mentally you are going to lose.

Leicester back to winning ways

Leicester ended 2016 in a way that their fans will appreciate having been used to, well, winning really. Their 1-0 victory over the Hammers pleased Ranieri as it got them to 20 points, which is half of his traditionally favourite number, 40.

Gray takes Sunderland to the sword

It really doesn’t look good for David Moyes and Sunderland. In David’s own words, Sunderland were dire and failed to cope with a side akin to many in the Championship which is where, frankly, Sunderland are likely to be finishing 2017.

So they had better come up with a way of beating teams like this, no? Burnley are better when Steven Defour plays and Andre Gray helped himself to a hat-trick.

Who has the guts to take over Swansea?

Who would be crazy enough to take over Swansea, hey?

Oh, Paul Clement you say? The latest example of a world class assistant not making a good number one is getting another go having failed quickly at Derby.

Having spent a lot of money. Failed at Derby. Gets the Swansea job. Yeah, football right?

Imagine failing having spent all that money in any other walk of life and getting a job at a bigger company. He must have mentioned the fact he once coached Ronaldo a couple of times, I reckon.

Anyway, he has his work cut out as Swansea’s moral took another gentle tickle in their battering by Bournemouth.

Finally today, China. You know a country’s league still hasn’t quite made it when any bid from a team in said league is referred to as the country making the bid. Confused?

“China in bid for Costa!” That’s because nobody knows any of the clubs that are in the league and, honestly, the players couldn’t care less as they are blinded by the pay packets on offer.

Carlos Tevez has trained three times as still doesn’t know who he has signed for. Anyway, China clearly feel their league needs a little more theatre as they have made a double swoop for Diego Costa, who looks like he might know a thing or two about eating dogs, and the world’s number one referee, Mark Clattenburg.

Please, please take the latter. And his mates. Well, colleagues as I am quietly confident Clatts doesn’t have many mates.