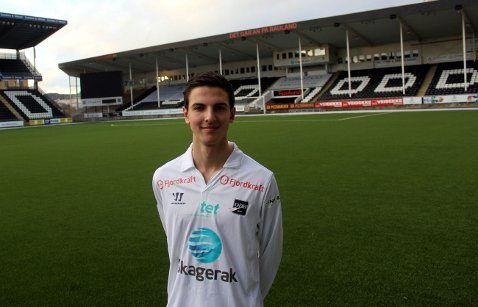 He has barely made his debut in the Norwegian Tippeligaen, but 17-year-old winger Rafik Zekhnini has already impressed enough to be chased by the likes of Manchester United and Borussia Dortmund.

The rapid left winger ran circles around Dortmund defender Gonzalo Castro in Odd’s Europa League playoff match against the Germans earlier this month, which suddenly sparked a massive level of interest in his signature.

Zekhnini is described as a typical winger with extreme pace and acceleration, complemented with an ability to pass a defender with ease and great finishing. He is constantly on the move and is a difficult player for a defender to mark and get close to.

Odd’s head coach, Dag-Eilev Fagermo, is in no doubt that the youngster can develop into becoming a top player and claims his potential is bigger than Real Madrid’s Martin Ødegaard.

“I believe Rafik has a bigger potential than Ødegaard. Ødegaard has fantastic skills and is a better passer of the ball, but the acceleration and pace on Rafik is out of this world. He is better at creating chances and a much better dribbler. To succeed at the highest level you need pace, and Rafik’s pace is ridiculous,” Fagermo was quoted by Norwegian newspaper VG.

Zekhnini only signed a professional contract with Odd in January this year and got his debut this summer at the highest level in Norway. After playing well and scoring two goals in his first four appearances, Fagermo started the 17-year-old in the Europa League playoff match against Dortmund.

16 seconds into the game, Zekhnini had an assist to his name as he set up Jone Samuelsen for Odd’s opening goal and he single-handedly ensured that Dortmund fullback Castro was substituted at half time.

The Norwegian press claim to have information that links Zekhnini with both Manchester United and Borussia Dortmund. United have allegedly already made an offer of €3 million for him and the speculation was ever increasing on 23 August as Zekhnini was ‘rested’ for Odd’s important Tippeliga match at home to Viking.

Norwegian pundits expect there to be a deal signed for Zekhnini to move abroad before the end of the current transfer window, which slams shut on 1 September. The main man answered was however more political when he officially dismissed any speculation about his future, but at the same time he admitted that he would like to play for Manchester United – one day.

“My dream is to play for Manchester United. It has always been my favourite club but you never know if there will be an offer,” he said.