Memphis Depay: Is the Dutch winger the right signing for Manchester United? 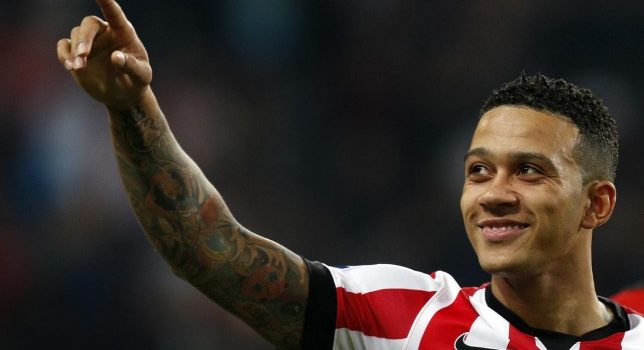 Memphis Depay: Is the Dutch winger the right signing for Manchester United?

This whole battle wasn’t very surprising. Memphis Depay was easily the best player in the Eredivisie this season and the whole world already got the chance to watch him showcase his talent at the 2014 World Cup, coached by…Louis van Gaal.

Ever since Depay started playing for PSV, he’s been touted as a future world class star. His talent is undeniable; his workrate even less. The young winger is a stubborn, hard working smart young man: he knows what he wants. In that sense, he’s way closer to Cristiano Ronaldo than to Lionel Messi.

From the very beginning of this season, it was obvious Depay wouldn’t stay another year at PSV. This was his last chance to win the Eredivisie with PSV, and boy did he take that chance. Top scorer (as a winger), best player, most free kicks scored… Memphis Depay simply shined. Nonetheless, he has his flaws. He can be too egoistic or naïve.

Let’s just say Depay’s game against Doordrecht a couple of months back sums up his season, his talents and his flaws. With the game at 1-1, PSV were awarded a penalty. The stakes were high: PSV couldn’t afford to lose or draw this game against a weaker opponent, with Ajax so close on their backs. Memphis Depay took the responsibility to take it and attempted a panenka…that miserably failed. But a couple of minutes later, he scored an absolute beauty of a goal to give PSV the lead and consequently the win.

Louis van Gaal knows what he’s buying. In van Gaal’s unofficial biography by Hugo Borst, the Dutch manager was described as Depay’s “second father”. Their relationship is good, and the manner in which van Gaal decided to buy Depay and succeeded in doing so in less than two days says enough about Depay’s real intentions from the very start: Liverpool or PSG were never real options.

The obvious question is: where on earth will Depay fit in next season? Considering Britain’s most expensive player ever, Angel Di Maria, is barely getting a game as a winger this season due to Ashley Young’s (temporary) excellent form, why would the Dutchman get more game time?

It’s a tough question and only van Gaal knows exactly what he wants to do. In my opinion, somebody will get sold (maybe Young) or loaned out (definitely Januzaj). But more importantly, Depay won’t play every single game. As I said before, he is smart. And he knows he’s young and talented, but not yet experienced enough.

Going from the Eredivisie to the Premier League, especially to Manchester United, is a huge step up. Everything is different. The intensity just isn’t the same. Depay’s first season will never be easy — he’ll have to adapt very quickly to everything, even though the fact van Gaal, Blind and van Persie are there will definitely help him.

For me, it’ll be a good season for Depay if he manages to get involved in most games as a starter or a sub, especially towards the end of the season. Let’s not forget he is very young and he has not been bought to win the league next season — he’s been bought to win the league for Manchester United in two, three or four years. Depay will need patience from the Manchester United fans, something they aren’t really well known for.

As a Dutchman, I am delighted with this move. Memphis Depay is the future of the Dutch national team and in the coming years. I have no doubt he will be our new Arjen Robben.