Kelechi Iheanacho: How the Nigerian starlet is repaying Guardiola’s faith at Man City

Kelechi Iheanacho: How the Nigerian starlet is repaying Guardiola’s faith at Man City 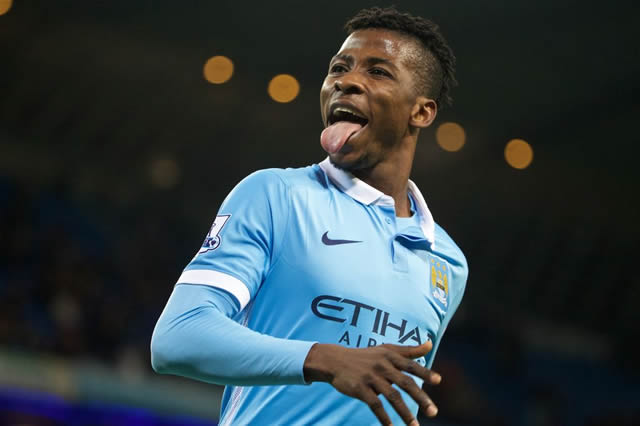 In the end, it wasn’t a problem.

The three match ban picked up by the Sergio Aguero for “brutally” elbowing West Ham’s Winston Reid at the end of August, with all the fuss about retrospective punishments that came with it, has been little trouble to Manchester City who have continued to look imperious without him.

Aguero’s blistering start to the season, he has 3 in 3 league matches as well as hat-tricks in both his Champions League outings, means the Argentine is likely to return to Pep Guardiola’s team in time for the trip to Swansea on Saturday.

Though having beaten Manchester United and irresistibly swept Bournemouth aside without him, City have ominously shown how well they are suited to deal with the absence of their star striker.

The crisp movement and chemistry between Kevin De Bruyne, Raheem Sterling, Kelechi Iheanacho and Nolito confused United and left Eddie Howe’s Bournemouth gasping for air as they were cut through with sharp incision.

City also dominated their mid-week European tie with Borussia Monchengladbach, a game Aguero started along with Sterling, De Bruyne and Jesus Navas, and it is a reflection of how well City have responded to the early teachings of Guardiola that the front 4 can be freely changed without any loss of fluidity.

Leroy Sane, the 20 year old who excited Guardiola so much he paid Schalke £31 million to land him in the summer, has been allowed to dip his toe in the water by coming on as a substitute in the last three games and his electric pace and direct running suggests the German will be a potent threat once he adjusts to the pace of the Premier League.

While his title rivals have stuttered and stumbled at the early hurdles, Guardiola has sent out a stark warning with the way his team have glided to 8 wins in his first 8 matches with a style of football that remains sumptuous regardless of system or personnel.

A disciple of Johann Cruyff, the Catalan espouses versatility and the way his attackers interchange and link-up with speed suggests they have responded immaculately to his demands.

You get the sense that the way his players are in-tune with each other and, with the strength in depth Guardiola boasts, injuries or suspensions will not stop this march.

Central to the squad effort, and possibly the most exciting given how he has progressed through the club’s academy, is Iheanacho who responded to Aguero’s suspension by scoring 3 goals in his last 3 matches.

His return doesn’t look too prolific given the recent free-scoring form City have been in, but his record of 10 Premier League goals coming from a total of 14 shots on target begins to paint the picture of a deadly striker.

The Nigerian also struck an FA Cup hat-trick to add to the 8 league goals he got as one of the few bright spots of Manchester City’s troubled campaign last year and he is repaying the faith Guardiola, who refrained from buying a centre-forward despite Aguero’s problematic hamstring and permitted Wilfried Bony to join Stoke City, has shown in him this term.

In 160 minutes of Premier League football he has 3 assists, including the deftly flicked-header that provided De Bruyne with the opener in the Manchester derby, to go with his 2 goals.

It is suggestive of a forward becoming receptive to his manager’s emphasis on team play; his finish against Bournemouth may have been a simple tap-in but Guardiola would have been pleased with the way he started the swift counter attack in his own half before heading towards goal with a burst of pace.

An industrious display troubled Swansea’s defenders in the EFL Cup tie on Wednesday night but starved of service he ended the night goalless.

Though as is important for all strikers is that he is on hand when the chances do come; his resounding close-range finish from David Silva’s drag-back against Monchengladbach and the way he was on hand to convert De Bruyne’s effort that cannoned back off the post against United shows that his instinct to find space in the box will be hard to eradicate.

Most of the hype may have been picked up by the emergence of the teenager across the City, Manchester United’s Marcus Rashford, but Iheanacho has indicated that in potential he is more than equal with pace to burn and an instinctive desire to find space in the box.

One wonders, depending on the amount of games he is given as Guardiola seeks to temper the demand on the youngster, just how prolific he can be when on the end of service from Silva, Sterling, De Bruyne and co.

There is also the added bonus of, with City realistically able to target four competitions and Brazil’s Gabriel Jesus due to join the club in January, Iheanacho’s Nigeria missing this season’s African Cup Of Nations, but it is hoped that the 19 year old’s progression under Guardiola will help the Super Eagles find a new dawn under new coach Gernot Rohr.

Iheanacho has 3 goals from 5 games with his country and as his talent grows, he can spearhead a generation that includes Watford’s Odion Ighalo, Leicester’s Ahmed Musa, Arsenal’s Alex Iwobi and Chelsea’s Victor Moses.

Under Guardiola’s studious and insightful eye there is no bounds as to how far City’s 19 year old, one of the few to break from the Elite Development Squad after joining in 2014, can go.