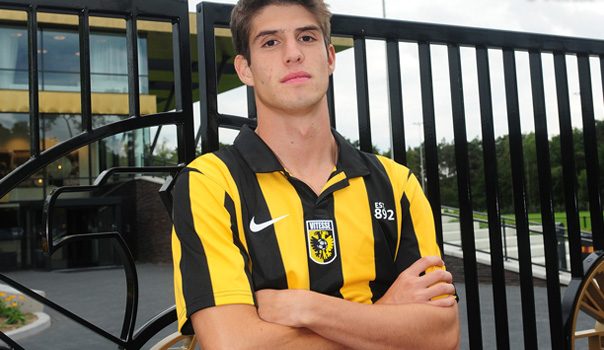 Lucas Piazon is widely regarded as one of the big upcoming talents in world football. Chelsea paid quite a large fee to acquire Piazon back in 2011, and the Brazilian only played one game for Chelsea’s first team so far.

His loan move to Málaga last season proved to be interesting, yet unconclusive. A dozen appearances, most sub-related. He never managed to get himself into the starting eleven.

With Chelsea signing the likes of Willian, Schürrle, and already having Hazard and Mata, the future didn’t seem bright in London. So Piazon decided to leave, on loan. And when a Chelsea player goes out on loan, the rule, dictated by their respective presidents, seems to be that the only possible direction is Aarnhem. Vitesse Aarnhem.

And so Lucas Piazon, 19 years old, left to the Netherlands.
His own words were that his loan move to Vitesse had to be “special” to convince Mourinho. Well, so far, special is the least you can say about his loan move. Try fantastic, superb?

In theory, Piazon is being deployed as a left forward. But reality is a bit different. Givenhis obvious talent, Peter Bosz has decided to give the Brazilian youngster the key to his team. He’s allowed to roam around, and while he’s still a constant threat down the left hand side, combining superbly with another Chelsea loanee, Patrick van Aanholt, Piazon is very active in the middle of the pitch, as a real attacking midfielder. He’s a constant goal threat, and his 10 goals and 8 assists give you enough proof.

After Jannsen’s injury, Vitesse’s midfield lacked a real leader, a playmaker. Lucas Piazon became exactly that. Fred Rutten’s “boring Vitesse”, almost single handedly carried by Wilfried Bony, now gone to Swansea, seems like a long forgotten memory. Bosz put his philosophy in place, and, just like his ex-club Heracles, his side are now a joy to watch.

Vitesse have scored most goals in the Eredivisie this season (40), and that is no coincidence. Overlapping, attacking fullbacks, forwards with a good sense for goal, and a midfield intelligent enough to create chances. All Vitesse lack is a real striker. Targetman Mike Havenaar may have acceptable stats for a striker so far, but he’s just not good enough to lead Vitesse to a Dutch title.

Because that’s just how far Piazon has brought Vitesse this season. The title, always an impossible, even unthinkable task for Vitesse, seems a possibility this year. The other usual top sides haven’t been that impressive, even though Ajax are on a very good run.

Frank de Boer’s side has even just nicked the title of “Winter Champion” off Vitesse in the last game before the winter break. A very symbolic title, but nonetheless interesting. PSV are too far off. The other candidates are Twente and Feyenoord.

Vitesse have been a joy to watch, and Piazon has been right in the middle of it. The youngster has taken a lot of shots, but he’s been very accurate.

But above all, his technique has impressed the Netherlands. A couple of his touches have been nothing less than breathtaking (his goal against NAC for example), and his overall technique has shown just why Chelsea paid a couple of million pounds for a 17 year old.

A lot has been said about Piazon and Vitesse, but the fact is he’s been the Eredivisie’s best player this season, alongside Ajax’ Daley Blind. And that’s not an unimpressive fact, for such a young player. He’s scored goals, assisted enough of them too, and he’s grown into Vitesse leader, their mainman. Vitesse are currently sitting in second place, only a point behind Ajax, and Lucas Piazon is one of the big reasons for their superb form.

The obvious question is if the Brazilian talent will one day be a Chelsea regular. When you see that even Juan Mata struggles to get a run of games for Chelsea, the obvious answer would be no. But it’s not that easy.

Lucas Piazon is a huge talent, and I don’t think Willian or Schürrle are more talented than he is. That doesn’t mean he’ll be playing at Chelsea next season, as a regular, but the next move is a loan to a competitive Premier League side.

Lucas Piazon’s future does seem bright, a lot brighter than at the start of this season. He is, undeniably, one of football’s big talents, and you should all keep an eye on him. He’s worth the hype.