Eden Hazard: Why the Chelsea star is worthy of the number 10 jersey 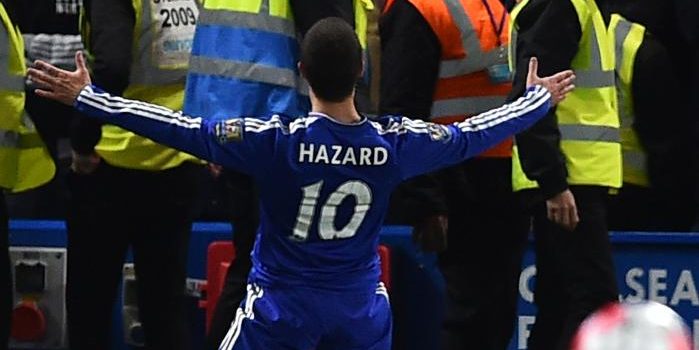 Eden Hazard: Why the Chelsea star is worthy of the number 10 jersey

Since arriving from French side Lille in June 2012 as a player with massive potential but still bubbling under Eden Michael Hazard has not looked back.

Instead, the mercurial ‘wizard’ has shone like a beacon for Chelsea Football Club.

Coming to Chelsea as a winger who could easily play on either wing, Hazard has already done enough to ensure that his name will easily feature in the Chelsea Football Club’s Hall of Fame.

Initially spotting jersey number 17, Hazard mesmerised football fans across the world week in week out for Chelsea in the English Premiership until the 25th of January of 2014 when Juan Mata who had been donning the coveted jersey crossed the floor to join rivals Manchester United.

Hazard immediately stepped up to pick that priced jersey number, that has been worn by legends of ‘the world’s most beautiful game’ like the great Pele, Diego Maradona, Zinedine Zidane, Ronaldinho, Francesco Totti, Michel Platini, Roberto Baggio, Lionel Messi among others.

As they say the rest is history as that jersey number seems to have spurred him to great performances that have left many football fans across the globe spellbound.

Eden Hazard like the majority of those football legends to have worn jersey number 10 is very adept in his skills and packs powerful shots with both feet and rarely misses penalties for both club and country.

In the five years that he has been with Chelsea, he has matured as a player on and off the pitch and it is not a surprise that on a number of occasions he has captained his Belgian national football squad that is replete with talented footballers of his generation.

Will be remembered for his Chelsea heroics

However, if Eden Hazard were to stop playing football today many a soccer fan would remember him more for his exploits in the Chelsea colours.

His major footballing strengths include, but are not limited to, dribbling, passing accuracy, holding onto the ball and of course his exceptional finishing.

For example, in the current 2016/17 season he has already banged in 17 goals in all competitions for Chelsea FC including a potential goal of the season that he scored against Arsenal on the 4th of February 2017.

That was arguably one of the best solo goals seen this year, in all top flight leagues around the world, wherein he picked the ball by the halfway line and ran the full length of the pitch on a mazy run dribbling past Arsenal players as if they were ‘stationary trees’ before slotting the ball past a bemused Petr Cech (who himself is a Chelsea legend) guarding the goal for the Gunners.

As if to confirm that he is human after all, the blistering Eden Hazard that the footballing fans are witnessing in the current Premiership season went through a saddening lull in the previous season and he was condemned by a majority of football fans for that dip of form, who thought he was part of a planned ‘mutiny’ against former boss Jose Mourinho who eventually got sacked from his role.

However, Hazard denied any role in the sacking of Mourinho.

The appointment of Antonio Conte as the new Chelsea boss for this season seems to have ‘resurrected’ Hazard from the doldrums, if this current season’s form book is anything to go by.

In fact he narrowly missed the PFA 2017 award by a whisker to one midfield dynamo going by the name of N’Golo Kante (his colleague at Chelsea).

However, he still has a chance to pick the football writers award though as the PFA is voted for by fellow players.

After facing all the criticism for the dismal showing last season Hazard reassured Chelsea fans that he had no intentions of leaving Chelsea as initially suspected.

He came out publicly to say that he will only leave Chelsea on a high.

The big question on every Chelsea fan and football fan in general is whether Hazard will leave at the end of this season seeing that Chelsea are champions in waiting, barring any disaster.

Rumours abound that Real Madrid boss Zinedine Zidane is a big fan of Hazard and consequently Real Madrid is preparing a huge offer to buy him at the end of the current season.

As of now the rumour has not been officially confirmed and it remains to be seen whether Hazard will decide to join the ‘Galacticos’ of Spain or remain at Chelsea and help them in the Champions League next season?

From a neutral perspective one would say that another season at Chelsea would be a wise move what with the Champions League looming.

However, in the footballing world the final say resides with the player. The 26 year old Hazard should be able to make a wise decision for his career.