Cesc Fabregas: The Evolution and Refinement of the Spaniard at Chelsea

Cesc Fabregas: The Evolution and Refinement of the Spaniard at Chelsea 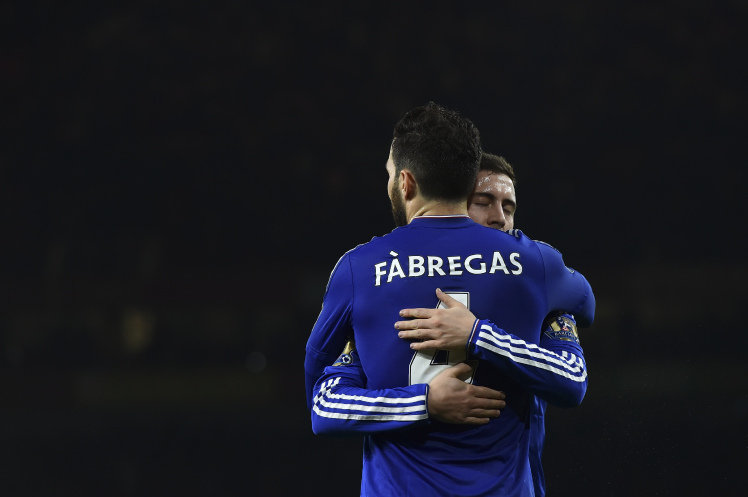 Following the performance crisis last season, Chelsea FC is finally on the verge of securing their sixth Premier League title this time under the management of Antonio Conte.

His well-executed 3-4-3 system team not only allowed Blues to find their way to another trophy but also helped their individual players to perform to the best of their abilities on the pitch.

However, as the diamond has naturally no place for deep-lying playmakers, it couldn’t incorporate Fabregas, the Blues’ only midfielder who not only possesses great creativity and imagination but also a brilliant touch.

Two seasons back, it was the same Fabregas who contributed to the title win with his playmaking talent. His performance as the attacking midfielder and his impressive understanding with Costa were among the most contributing factors.

Indeed, we can’t distrust his capabilities.

He can initiate attacks from the center using his vision and imagination and can often make killer passes while roving around the midfield to allow his team to score. A player with such attributes is best fit for the role of central attacking midfielder in a 3-man midfield.

But the Spaniard can’t go box to box throughout the game which is the core of a 3-4-3 midfield; he simply doesn’t have the stamina to.

This season, in his initial 4-2-3-1 and 4-3-3 formations, Conte tried to fit Fabregas as one of the central midfielders, but his role was confined to defensive duties. This didn’t come out to be fruitful and even led to a 2-1 home loss against Liverpool.

Then against Arsenal, the 30-year-old couldn’t show the tactical discipline and the tracking and marking capability demanded by Conte allowing the opposition to exploit the gaps between the Spaniard and the other two central midfielders.

At his favourite position, he was restricted to stay far behind the attacking line where he is naturally inclined to.

Even though Conte smartly reacted to this by reshuffling to 3-4-3 for the last quarter at Arsenal and has still adopted it as Chelsea’s trademark formation, this had almost closed the doors for Fabregas as a holding midfielder.

The partnership of Kante and Matic and the defensive solidity of the back 3 also had left no room for the Spaniard at the back in the first half of the season, other than as an occasional substitute.

Adapting better to the reformed formation

Good news for Conte and for Fabregas is that the Spaniard is now adapting to the Conte’s system and enjoying his newer version as he gets to touch the ball a lot in the double pivot partnership with N’Golo Kante.

With a solid backline and a strong partner in form of Kante, Fabregas has liberty to choose between locking their own defense and lock-picking the opposition’s one.

He has eventually made his way in the Conte’s system in the second half of the season and has contributed at least seven points this season through his winning assists and goals.

He even contributed to the 3-1 win against Swansea being in the starting XI by completing a good number of key passes, touches, clean tackles, and equally protecting the backline with Kante.

With these developments due to his recent integration with Conte’s needs, Fabregas is paving his way to the modern midfield success which is more oriented to tactics than technique.

The former Arsenal and Barcelona man is learning to develop a perfect balance of the two approaches under Conte and has improved a lot. Being evolved as a creative playmaker with modern defensive and tactical capabilities, the No. 4 is surely an asset for the Blues.

However, Matic and Kante are still Conte’s first-choice midfielders. If he has to choose between Matic and Fabregas, benching either of them would be a waste of their talent since both deserve to be in the starting lineup.

Secondly, as the team is expected to face frantic attacking line next season, Fabregas would have to revert to his defense-only duty so as to strengthen the shield.

Besides, the freedom given to the wing-backs to go back and forth can leave key spaces at the flanks to be exploited by opposition.

This would also require Fabregas to focus more on the back.

Despite him being more adapted to the defensive midfielder role, leaving the Spaniard far behind the frontline in that case can irritate him again.

Just like with aggressive attack-lines, Chelsea is expected to face teams with stubborn defenses against which they definitely need a highly imaginative lock-picker like Fabregas; and restricting him to the back could only cost Conte key scoring and passing opportunities.

Fabregas has already exhibited his talent as a game changer and an effective goal-scoring partnership with Costa.

Given this and the predicted reformation by Conte to 3-4-1-2 next season, Fabregas would suit well to the central attacking position as No. 10. His clean tackles and the freshly learnt defensive skills can allow him to win the ball as high up the pitch as possible.

Even as a substitute, Fabregas in attack will be more suitable than in defense.

Just as he has been evolved as a defensive midfielder with playmaking and attacking abilities, he can be re-evolved as a central attacker who can also demonstrate defensive and tactical acumen high up the pitch.