Eden Hazard: Why the Belgian needs to step up to save Chelsea’s season 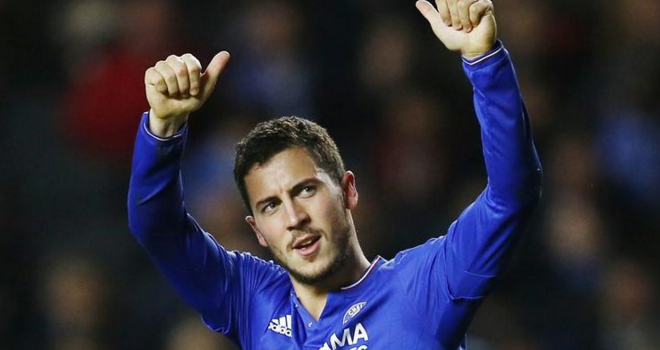 Eden Hazard: Why the Belgian needs to step up to save Chelsea’s season

There have been many mysteries this season in the Premier League. Leicester leading the table as we head into the final stretch would be the greatest but the form of Eden Hazard, last season’s undisputed best player in the division, would rank pretty close.

The Belgian was electric throughout the duration of last season. He scored 19 times for the Blues in all competitions as well as being the side’s principal creative force and was a huge reason why Chelsea cruised to the Premier League title.

He’d netted 17 times the previous season too and his performances had helped establish him as one of the division’s biggest stars and a player that could grace any team in world football.

However the 2015/16 season has certainly been his most disappointing since joining Chelsea from Lille in the summer of 2012. Hazard is almost unbelievably yet to score in the Premier League and needed a penalty in Milton Keynes last month to get his tally for the season off and running.

The decision to let Hazard take the penalty was a token gesture in reality and one that shouldn’t have really been necessary for a player of his quality. It wasn’t until the FA Cup 5th Round and a tie against an admittedly under-strength Manchester City that we really saw the Hazard of old.

Influence evident against the Citizens

His influence was evident throughout and a curled free-kick provided the goal his performance deserved. Chelsea fans will be hoping it was the game that will help launch his season. It may be too late to salvage his side’s Premier League campaign, but three months of Hazard at his very best could yet lead Chelsea to silverware this season.

Certainly the FA Cup is a realistic target. A Quarter Final tie at Everton is tough but not one that would have sent fear shuddering through the Chelsea of years gone by and in the past couple of months under Hiddink they have began to look more like their former selves.

Their Champions League tie with PSG is also finely poised and the Blues have experience of toppling the likes of Barcelona and Bayern in the non too distant past, so this season at Stamford Bridge is by no means a write-off.

The need to step-up

Chelsea need Hazard to step up to the plate though. He remains their most talented player and someone who could produce a moment of brilliance that could help decide tight games. March will be a crucial month in Chelsea’s season and a reinvigorated Hazard could be the difference between it petering out into utter mediocrity or a campaign that promised little finishing with a flourish.