The Championship Corner: Why McCarthy is in stasis at Ipswich

The Championship Corner: Why McCarthy is in stasis at Ipswich 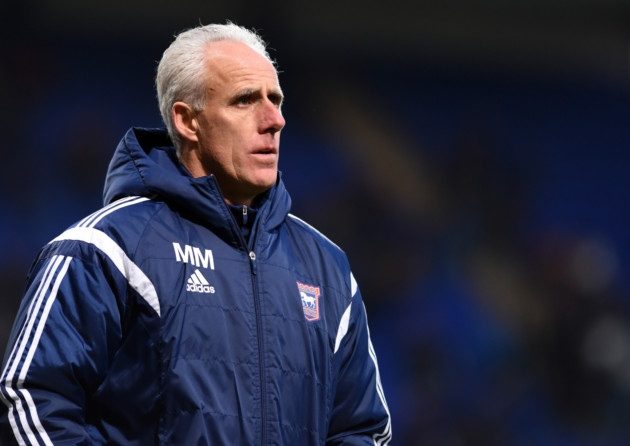 There is unlikely to be too much festive cheer in the air for Mick McCarthy over the Christmas period as he tries desperately to solve his Ipswich team’s issues with consistency.

The Tractor Boys, who missed out on the play-offs by five points last season, have not managed to win two games in a row yet this season and the 2-0 defeat at Bristol City, a defeat McCarthy described as “one step forwards, one step back” coming as it did after the impressive 3-0 win over QPR, has left them looking nervously over their shoulder.

Outside the top 6, only Derby County have conceded less than Ipswich who have recorded 8 clean sheets, but it is scoring goals that has been the problem.

The loss at Ashton Gate was the tenth occasion McCarthy’s men have drawn a blank this season and it is only Wigan that have scored less than their 17.

The lack of firepower crept in to become a problem towards the end of last season when a succession of draws saw them fall away from the top 6 and the failure to replace Daryl Murphy, the Irishman who hit 50 goals across 3 seasons for Ipswich after re-joining them permanently from Celtic in 2013 and is now warming the bench at Newcastle, has been costly.

The absence of Brett Pitman, joint top-scorer with Murphy last term, for a large chunk of the season due to injury hasn’t helped either and though Freddie Sears, David McGoldrick and Luke Varney have each chipped in with a couple of goals, Ipswich’s attacking play has been anaemic.

Their average of 11.1 shots per game is the 2nd worst in the Championship while it is only bottom-club Rotherham that have created less chances than the 148 Ipswich have made.

It is has led to accusations from fans of McCarthy being “boring”, criticism that came to a head in an interview following the draw with Norwich.

McCarthy also ranted at Sky Sports and the match officials after the 1-1 draw and there were signs pressure was building on a manager who has always been characteristically waspish.

Supporter angst towards the Irishman extends back to 2014 when there were murmurs of discontent about the pragmatism that allowed him to stabilise a club that was in turmoil when Paul Jewell departed in 2012.

A change in approach to a more attacking style in October gave way to a run of one defeat in five, but McCarthy’s bullish mood ahead of the game with Nottingham Forest was undone as they conceded to Britt Assambolonga within seconds on their way to a 0-2 defeat at Portman Road.

Bright spots have come with Tom Lawrence, the 22-year-old winger on loan from Leicester City, and top scorer Grant Ward who has continued to thrive after being named Rotherham’s Young Player of the Year for last season.

21-year-old Adam Webster has impressed since moving from Portsmouth in the summer while Teddy Bishop has followed in the footsteps of Luke Hyam, who has made 100 appearances for Ipswich before he turned 25 but is currently out with a long-term knee injury, in establishing himself in the midfield.

Building up the youth on a shoestring budget

Both Knight and Doyle are part of the same under-15s team that has scored over 80 goals this season and McCarthy, given the paucity of goals in his senior side, would be blameless for being tempted to hand an early promotion.

Of course they are both too young but Ipswich’s desire to promote their own has been unsurprising with the days of spending long-gone as debts to owner Marcus Evans spiralled to £70 million; it is four years since Ipswich last spent over £1 million on a transfer fee.

To compensate McCarthy has had to rely on a scouting network that found Tyrone Mings, signed for £10,000 from Chippenham Town but sold to Bournemouth for just under £10 million, and Aaron Creswell, now at West Ham, to raise funds that, frustratingly for McCarthy, haven’t been invested back into the side.

The likes of Luke Chambers, Christophe Berra, Jonathan Douglas, Giles Coke and Cole Skuse, the more experienced members of McCarthy’s squad, were all signed for free while Jonas Knudsen has only missed a handful of games at left-back since joining from Danish club Esbjerg for over £400,000 in summer 2015.

McCarthy has shown that he can manage on a shoestring and it is remarkable that Ipswich have competed at the top end of the Championship for the last three years.

Now they have dropped away and it is clear they are lacking something. Most worryingly for McCarthy and Ipswich, it appears to be something only money can buy.