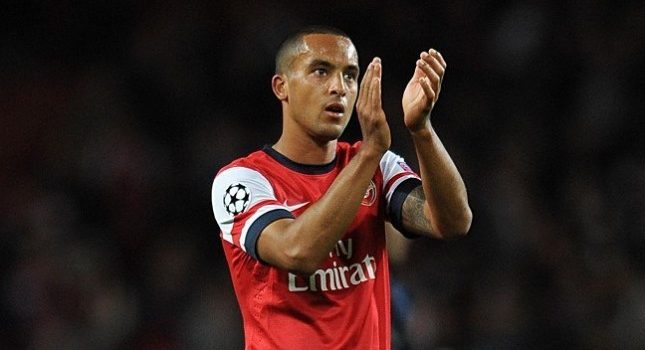 Arsenal forward Theo Walcott’s contract is due to expire at the end of this season and by January he will be eligible to begin negotiations with other clubs. Fans feel very much on the fence with this situation. Some wouldn’t mind seeing the back of Walcott, whilst many are aware of his contribution and remain sceptical of this decision.

Walcott bagged 11 goals and 10 assists last season. Despite this, Theo is criticised for being nothing more than a sprinter on a football pitch, as he has turned out some shocking performances in an Arsenal shirt.

Walcott joined Arsenal in 2006 in a £12 million move, making him England’s most expensive teenager at the time. However Walcott has failed to live up to the reputation he built as a youngster whilst with Southampton.

So what’s the real value of Walcott?

He has been at the club for six years and is yet to win any silverware. There haven’t been many games where Walcott has been the standout star, dragging Arsenal to victory, leaving a difficult question as to how much he is worth.

It is very well documented English player’s price tags are always inflated. For example, Jordi Alba. Signed from Valencia to Barcelona in a £12 million move. His fantastic displays for Spain in the Euro’s gained him his big career move at a more than reasonable price and in this day and age a relatively good bargain. However, let’s take a player like Caroll, who although is a talented and effective player his move to Liverpool for £35 million was far too overpriced, especially after only half a season in England’s top division.

Although in the fray, he is not a first team regular. However, he does have 30 caps to his name, but a poor International record further undermines Walcott’s end product, with only four international Goals since his call up in 2006. In which three came in one game against Croatia in 2008 and he has had only one solitary goal to his name since.

Arsenal’s wingers are very different to a few years back. The wingers we had previously were more creative midfielders played out of position, however produced craft and creativity, something the current wingers lack.

Oxlade Chamberlin has all these qualities. I think status and disruptiveness, which could result in loss of form is the reason why Oxlade is yet to take Walcott’s place on a permanent basis. Chamberlin has shown signs of inconsistency, he is still very young.

However, his pace, strength, maturity, ball control and desire is what has identified him asa true talent. I’ve watched games where Walcott has been virtually absent, ineffective, poor decision making, lack of composure has stunted attacks, similar to Gervinho, who has been ridiculed for wasted efforts.

If Arsenal are to lose Walcott next season, they must invest on a new forward. One that is comfortable on the ball, creates opportunities and who has that bit more quality, Arsenal’s inconsistent attack would look more potent. But at the same time Miyachi is due back next season.

The performances and potential talent of Alex Oxlade Chamberlain is an exciting prospect for fans, and he is more than capable of filling in the shoes of Walcott.