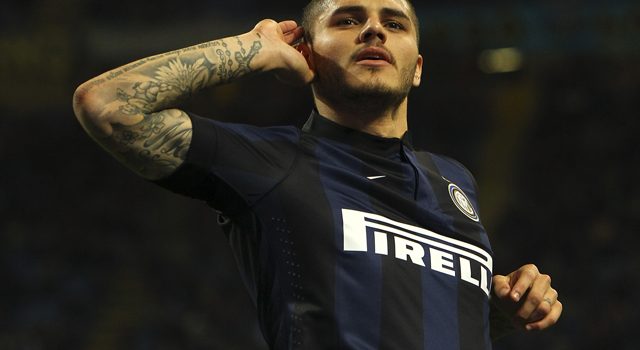 Not for the first time in recent years it has all gone rather quiet on the Arsenal transfer front again.

While the Manchester clubs have been spending big, the Gunners have failed to make a significant addition since the signing of Granit Xhaka at the start of the summer.

A forward still has to be treated as a priority and one man supposedly on their radar is Inter striker Mauro Icardi.

While Gonzalo Higuain may have been the dream solution, his compatriot Icardi might just be the next best thing.

Certainly in Serie A over the past two seasons only the 23 year old has come close to the goalscoring heroics of Higuain.

Icardi was the joint top scorer in Serie A in the 2014-15 season with 22 goals and added a further 16 last term again at a ratio of better than 1 goal in every 2 games when you take into account his total minutes on the pitch.

Only Higuain has scored more goals than him in Serie A over the past two seasons and Higuain got his goals in a significantly stronger side with Napoli out-performing Inter in both seasons.

Arsenal need a goalscorer and Icardi certainly is that and it’s hard to see him not replicating those kind of figures were he to move to North London and play for a team that creates lots of chances in a more open league.

As well as being a reliable source of goals, another box he ticks is that of leadership, something that has been lacking at the Emirates for several years now.

You don’t become captain of a massive club like Inter at the age of 22 unless you are a very strong character but that is what he did and he could inject some real passion into the Arsenal team.

Tactically, he is aware as you have to be to score a lot of goals in a highly tactical league like Serie A where defences frequently come out on top.

He possesses pace and power too so should be able to adapt quickly to the English game although he has at times been criticised for wasting possession and can be a little inconsistent although that may just be down to inexperience.

He would though give Arsenal something they definitely don’t have and would certainly provide genuine competition for Olivier Giroud.

They already have a host of players who are pretty on the ball but not always effective and Mauro Icardi would bring a certain dynamism to the Gunners’ attack.

What’s more, he is a realistic target who wouldn’t break the bank. Icardi has only made one international start for Argentina, who are blessed with a wealth of talent in his position.

He is also yet to play in the Champions League and as such isn’t going to be someone you have to pay upwards of £40 million for.

At 23 his value is likely to increase over the coming years so he’d be a solid investment and with Icardi reportedly unsettled at the San Siro, now would surely be a good time to pounce and capture his services.