Yevhen Konoplyanka: Is Sevilla’s winger a realistic target for Chelsea? 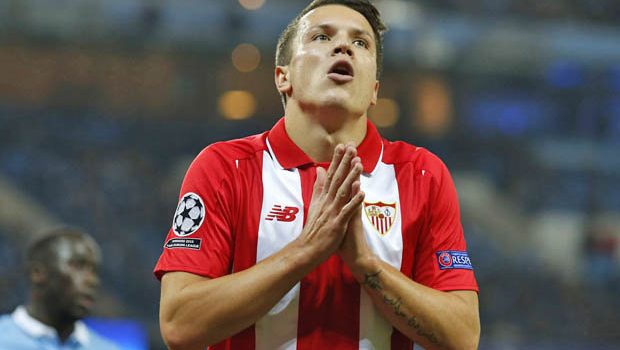 Yevhen Konoplyanka: Is Sevilla’s winger a realistic target for Chelsea?

Just a few months after Yevhen Konoplyanka made the switch from Ukrainian side Dnipro Dnipropetrovsk to Sevilla in Spain, rumours of a move to the Premier League have yet again emerged with Chelsea the latest suitors.

Premier League move back on

The 26-year-old was previously been linked with a move to England back in 2014, with Liverpool, amongst others, reportedly interested. As a result, it came as a surprise to many observers when he eventually made the switch to the Andalucian club.

In a new twist to proceedings, it has been suggested recently that under-fire Chelsea boss Jose Mourinho has been keeping tabs on the player with a view to making a move as early as January.

The fact that the Portuguese coach flew to Kiev earlier this month to watch Ukraine take on Spain, has given added credence to these claims.

New blood needed at the Bridge

With Chelsea struggling in their domestic campaign - amidst talk of player unrest and dressing room bust-ups - a January revamp has been predicted, with Konoplyanka as the main target.

Other names thought to be on Mourinho’s wish-list include Shakhtar Donetsk players Alex Teixeira and Andriy Yarmolenko.

Something’s got to give

It has become clear that not all the playing staff at Chelsea are seeing eye-to-eye with the current boss. But rather than disposing of the double Champions League-winning coach, it has been suggested that the club will sanction a purge of players thought to be rocking the Chelsea boat.

This will give Mourinho the chance to expel the agitators, integrate fresh faces and continue working with players that he has a strong working relationship with.

Who will make way?

Of the players expected to be ushered out the door, Cesc Fabregas and Eden Hazard are perhaps the most high profile, with the Belgian winger the most likely to make way for the incoming Ukrainian.

Hazard’s poor form on the pitch has been attributed to his deteriorating relationship with the Special One and subsequently resulted in the player being dropped to the bench.

So what does Konoplyanka offer?

Konoplyanka can play on both flanks - although the left side is his preference - and has previously shown some strong defensive abilities, particularly during his time at Dnipro.

His combination of dynamism and strength should appeal to the Chelsea boss.

Why would Sevilla sell?

The former Dnipro player has yet to establish himself in Spain, with Sevilla boss Unai Emery often preferring to use him as an impact substitute.

The Spanish club are not precious about hanging on to a player if there is a profit to be made and could be willing to release the winger in January.

After acquiring his services on a free transfer in July, club officials wasted no time in slapping a €40m release clause in his contract - a figure that Chelsea would need to match or come close to, in order to secure his early release.