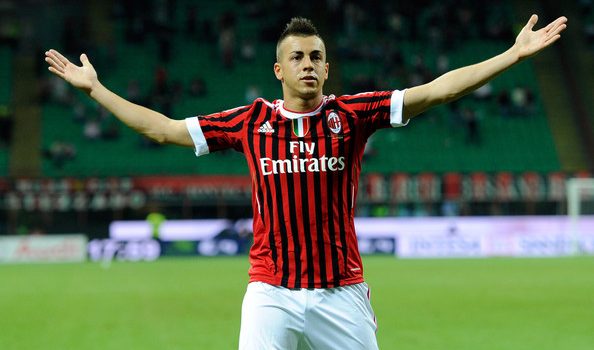 In a so far frustrating season both on and off the pitch, the emergence of Stephan El Shaarawy has been one of the few things Milan fans have had to get excited about. Now with the versatile 20 year old, who can play in central midfield as well as in attack, improving seemingly game by game, one wonders just how far this exciting young talent can go.

The journey of Stephan El Shaarawy began in the town of Savona, where he was born to an Egyptian father (hence the name despite El Shaarawy playing for Italy) and an Italian mother. He had only just turned 16 when he made his debut for Genoa in the 2008/09 season, but he didn‚Äôt truly arrive on the scene until he joined Serie B side Padova on loan for the 2010/11 season. The youngster‚Äôs exciting performances helped the normally mid-table side finish in 5th place and only a few play-off wins off a place in Serie A.

Such excellent performances didn‚Äôt go unnoticed as the mighty AC Milan sprung a surprise and took El Shaarawy off Genoa. His first season with the Rossoneri went better than many expected, with El Shaarawy, who had also been playing with Italy‚Äôs U-21 side at points in the season, making 28 appearances in all competitions throughout the season.

But this season has undisputedly been El Shaarawy‚Äôs breakout year. His international debut for Italy‚Äôs senior squad came in August and he has had a superb start to the season, looking immensely sharp and lightning quick.

Having played in 11 of Milan‚Äôs 12 competitive games so far, El Shaarawy has consolidated his place in Milan‚Äôs starting eleven, while his impressive scoring record of 6 goals, including one against Zenit St. Petersburg in the Champions League have helped to increase the level of excitement around the young maestro.

His dribbling ability and pace means he is rapidly becoming one of Europe‚Äôs most feared attacking players and he has added a much needed dose of vibrancy to the Milan squad, with Nigel De Jong , Robinho and Kevin Prince Boateng not really offering any energy to the Milan midfield.

I am certainly predicting great things for Stephan El Shaarawy as at times this season he has looked absolutely unstoppable at times, and he has only just turned 20. One would think his levels of strength would improve and if it does he could be the complete package. Additionally, with both AC Milan and the Italian national team in a period of transition, I believe El Shaarawy with his lightning pace and top drawer technical ability can inspire and lead both his national and his club sides into further glory down the road. Then again, although Milan are still a major club around the world, their books still need balancing.

The summer sales of Zlatan Ibrahimovic and Thiago Silva to PSG were out of a desperate need to, not simply to get a few million to add to their transfer fund. There are worries in Milan that if El Shaarawy continues to improve, eventually a super-rich club such as Manchester City or PSG could make Milan an offer they won‚Äôt be able to refuse.

However, for now the striker remains property of AC Milan and with his help he could be the man who leads the Rossoneri into a glorious future.