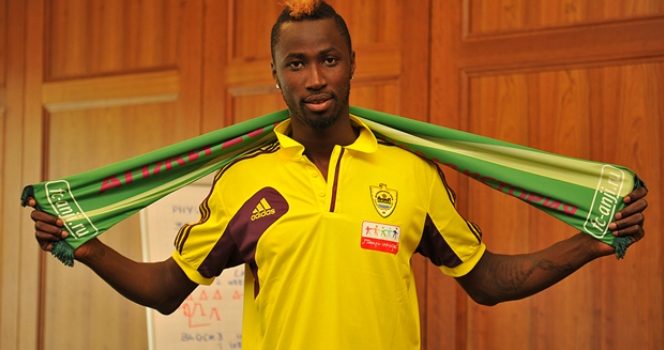 The Ivory Coast may be a poor, typically deprived African nation located on the African west coast, but it produces its fair share of top class players. The Ivorian national team is generally regarded as the strongest African national team, despite flattering to deceive at international tournaments, and when you look at the players that they have it’s easy to see why they’re regarded as the best in Africa.

The country boasts top class talent like ex Chelsea legend Didier Drogba, Manchester City defender Kolo Toure and Arsenal’s talented Gervinho, players who have been able to assert themselves in the best leagues in the world despite hailing from such a deprived nation. And now, yet another new Ivorian star is causing a stir around Europe. 22 year old striker Lacina Traore, who right now plays for Russian outfit Anzhi Makhackala, has been talked about for a while now.

At 22 years old, he isn’t exactly old, but at the same time, he isn’t a teenage rising star. But if you take a look at his track record, it’s slightly surprising that only in the past year he has been interesting the biggest clubs around Europe, as he isn’t exactly new to the big stage. In 2008, Traore made the move to Europe from the Ivory Coast, but until then, it hadn’t been clear that he would turn out to be such a prolific goalscorer.

Having progressed through the ASEC Miomas football school, he opted to join one of the biggest clubs of the country, Stade D’Abidjan as a young and sprightly 17 year old. But despite having always been a striker, the goals didn’t exactly come flowing. After playing 27 games for the club in his two year stay, he managed only a measly 6 goals.

So it came as a slight surprise when Romanian giants CFR Cluj came calling, in early 2008. Cluj were at the time in the process of establishing their name in Romania however, and for the Romanians it was to end up being a very memorable season - having managed to clinch the Romanian title, and therefore earning the right to compete in the Champions League for the first time in their history. But it wasn’t to be until the 2009/2010 European season when Traore would finally get the chance to strut his stuff on the European stage.

In his first year, maybe because of the factor of only being 18, Traore found playing time hard to come by. In fact, in the 2008/2009 season his time on the field was limited to just the 6 games which plundered just the single goal, but all that was to about to change. At the start of the 2009 season, chances for the first time started to fall to Traore’s way more and more often. And if he had felt bad about missing out on Cluj’s Champions League adventure, he soon proved everyone why he should have been involved.

On his European debut against Copenhagen in the Europa League, he quickly made his mark, scoring a spectacular goal. He followed that up by scoring again, this time against Sparta Praha, but his chance in the Champions League and not only in the Europa League, was only around the corner, and this was where he would really make his mark. Having reclaimed their Romanian title, Cluj had once again earned the right to try their luck against Europe’s best in the Champions League, and this is where Traore really found himself getting noticed.

Playing time came his way too, being selected for every one of the 6 matches, and he took advantage of his new found opportunities. A goal in a win against FC Basel was important but the equalising goal against AS Roma in Romania captured more headlines, and it soon became clear that Romania wouldn’t be his home for much longer, but it came as somewhat of a surprise of where he set up camp next.

As soon as February 2011, for a fee of only around 6 million Euros, Russian Premier League side Kuban Krasnodar had landed themselves a real coup. 6 million for a player who had been scoring against Europe’s best was regarded as somewhat of a bargain, especially when you consider, that Kuban are more accustomed to relegation battles than anything else. But almost singlehandedly, he managed to dramatically change Kuban’s fortunes, from being relegation candidates to being challengers for a European spot.

Almost immediately Traore became the team’s spearhead and the go to guy, and in his superb debut season, an impressive 18 goals in 38 games followed. But it wasn’t so much how many goals he scored that captured the attention of many, it was the way in which he scored them. Standing 6ft 8 inches tall, you may be forgiven for thinking that he would be pretty clumsy with the ball at his feet. But that’s where you’re mistaken: a large percentage of his goals were scored using his feet rather than his obvious aerial prowess, and some of his goals were worth seeing more than once.

A stunning goal against Rostov in the early part of the season, powering the ball home in the far corner from a tight angle signalled his intentions, but right at the end of the season in spring 2012 his most eye catching to date came about, against champions Zenit Saint Petersburg at home. Running almost half of the pitch with the ball at his feet, he single handedly ripped apart the Zenit midfield and defence before calmly slotted home past goalkeeper Vyacheslav Malafeev, in one of the best goals of the season.

Despite all of that, Kuban only managed to finish in 8th place and therefore missed out on Europe, and it wasn’t long before he found himself moving on to bigger and better things.

Fellow Russian side, Anzhi were so impressed by Traore’s debut season in Russia that they felt the need to splash out a chunky sum of 18 million euros for the lanky Ivorian, facing some serious competition for his signature. Liverpool had reportedly been hot on Traore’s trails and Zenit manager Luciano Spalletti was rumoured to be interested as well - but Anzhi got their man, and already with the likes of Samuel Eto’o in their ranks, Anzhi’s attack had quickly become one of the most feared in the whole of Europe.

Having finished 5th last season the filthy rich Dagestani side had earned the right to play in the Europa League, and after a season out of Europe, Traore once again got the chance to show the whole of Europe what he is made of. And it hasn’t taken him long to settle in. 7 appearances in the Europa League have been followed up with 3 goals, which included Anzhi’s first goal in the group stage against Udinese. In the Russian league, he and Eto’o are striking up a fearsome partnership, with Traore already with 7 goals in just 10 league games so far to his name.

Yet still, he is without even a single Ivorian cap to his name - still yet to get on the pitch for his national side. It’s slightly understandable, when you think of the amount of talented forwards the country has, but Lacina Traore is getting better and better and surely it will become almost impossible to ignore him any longer.