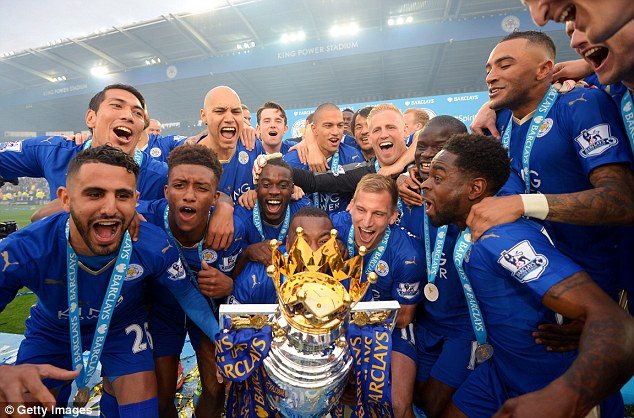 Sightings of the Loch Ness Monster, Bigfoot and The Abominable Snowman have all been reportedly spotted over the decades, add to that the uncertainty of whether the Moon landings truly existed and you start to build a catalogue of elaborate hoaxes that have gone on to be debunked.

Well I can now exclusively reveal another to add to your collection, it’s none other than Leicester’s league title win last season. Surely now we’ve seen a joke that has got too far out of hand with repercussions being felt all over the East Midlands.

Not since 1938 when Football was still yet to be invented by Rupert Murdoch have we seen such an awful defence of the top flight title.

It was Manchester City who were still yet to be invented by their Abu Dhabi owners that hold the unfortunate record of being the only champions who went on to be relegated, but soon we could be seeing Leicester added to the list.

After the likes of Manchester United, Manchester City and Chelsea all decided to take a year out of the Premier League last season (there is confirmation of this as when you look at the league table their records disappear like Marty McFly’s family in Back To The Future 2) the respective owners Roman Abramovich, The Glazers and Sheikh Mansour all met in secret in a London hotel.

RA: So with the Premier League only with 17 teams this season, we need to decide who we can let win the title this season.

SM: What about Tottenham, a harmless club who deserve to move up to the top table?

RA: I said no London clubs but hahahahah tell me another joke, you funny.

RA: Even with us three not competing it will never be their year.

JG: Roman what was the name of that man you unscrupulously sacked even though you reached the Champions League Semi Final and finished second in the Premier League 2004.

RA: Claudio Ranieri, I made sure he’ll never work in Football again.

RA: Yes that’s it. Leicester – a team so under the radar no-one will ever think we’ve let them win the league.

And that, ladies and gentlemen, is how Leicester won the league, they were literally handed the title in a secret meeting in a London hotel.

Now that title can never be taken away from them, that is unless Jamie Vardy was playing while on not only illegal but life damaging amounts of Red Bull last season.

But this year when they’ve actually got to do the thing that champions have to do which is defend the title, things have got a little bit tougher.

But to have been this abject especially since the start of the year will not only cause great concern for everyone connected with The Foxes but will also have people thinking the unthinkable and that is relegation.

N’Golo Kante made the right decision in moving on last summer, they have peaked as a team. It is simple as that, Vardy should have gone to Arsenal as his biggest asset has gone thanks to clubs finally wising up as to how to defend him.

Danny Drinkwater he of ‘take him to the Euro’s fame’ is half the player he was last season, perhaps that is because Kante was doing twice the work in the midfield while Robert Huth and Wes Morgan look like a couple of old carthorses.

Ranieri rested on his laurels over the summer, rewarding those players that won the title with big fat contracts. But those players know last season was as good as it’s going to get, so where is the incentive this season.

The Tinkerman failed to refresh his side to go again and what money he has spent all £77m of it has been spent very badly.

The full confidence that has been bestowed him by the clubs Thai owners is fair enough after winning the title but because Ranieri has a free pass because of last season’s heroics it almost puts them in a worse position.

Look at the likes of Swansea and Hull who have rolled the dice and especially in Swansea’s case they are going through a resurgence.

Sunday’s result over Leicester is perfect proof of that and as The Swans are currently in an upwards trajectory the opposite can be said for Leicester, especially now that Paul Clement’s men sit above the champions.

So it seems as what was a harmless joke by the real powerbrokers of the Premier League last season has turned out to be a cruel prank gone wrong and now Gary Lineker might have to present Football League on 5 next season wearing, yes, his pants.