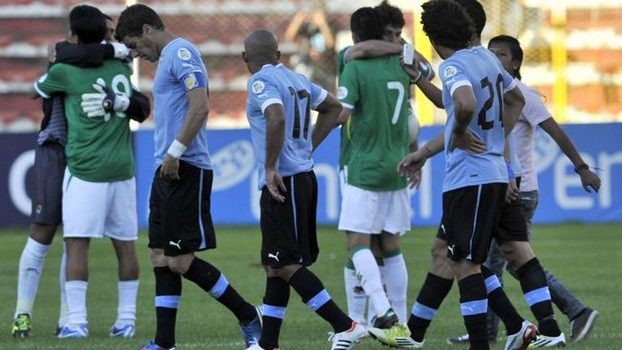 Forlan, Lugano, Abreu, Scotti. When you see and hear these great players’ names, you automatically know they’re Uruguayan. Players like Forlan and Lugano hold the great nation on their shoulders, but people are wondering whether their shoulders are becoming too old to hold the pressure of their country?

With their recent performance against Bolivia, people are now questioning Oscar Tabarez’s motives for keeping players like Forlan and Lugano in the starting line-up. Uruguay have a ton of talent left sitting on the bench while the ‘oldies’ are busting their guts on the field, trying to keep up with fresh lungs like Messi. If this is the frame of mind he is keeping, will Uruguay even qualify for the World Cup?

Audiences have seen Uruguay’s recent form “shining bright” in the 2014 World Cup Qualifiers in Brazil. They have won 3, tied 3 and have lost 3 games so far and they are currently in fourth place on 12 points; behind Argentina, Colombia and Ecuador. Those two games they have lost though have been absolute disasters; 3-0 against Argentina, 4-0 against Colombia and a devastating 4-1 loss to Bolivia.

Uruguay was an absolute mess during these matches. Anyone who watched the games knew Uruguay stood no chance against teams like Argentina and Colombia. The team was disjointed and were unable to complete a set of 3 passes to each other.

It was frustrating to watch Uruguay rely on their counter attack as everyone knows that is a dangerous tactic to play in today’s football – as demonstrated by the team. Along with their perilous tactics, their passing game was horrendous and there was no game plan evident. It was a shooting gallery where Muslera was playing the duck.

“I want to believe this is just a stage; One where, incredibly, everything went wrong.” - Uruguay’s captain Diego Lugano.

Why does Uruguay have players like Lugano leading the team when he can’t even make it off the bench for his club team? Uruguay cannot afford to have out of form players on the pitch for 90 minutes and expect them to make an impact.

Forlan may be playing good with Internacional, but age is creeping up on him. At times he seems non-existent on the field. He’s not shooting on goal and he is not creating any chances to help Uruguay progress. Whether this is due to poor form or pitiable game plans, he is not performing to the international standard that he needs to be at.

Along with out of form players on the pitch, there are out of form players occupying valuable space on the bench. Why waste precious space with old players like Abreu when there could be fresh feet ready to win the game for Uruguay? Why put on Lugano and Forlan when there are star quality players like Abel Hernandez and Cristian Rodriguez who could tear up the pitch with their eyes closed? It’s just an absurdity!

It’s just a sad reality Oscar Tabarez has to face – that his team is growing old. Tabarez wants to continue serving the players which won him the Copa America and played tenaciously to come 4th in the recent FIFA World Cup in Africa. But these legends like Forlan and Lugano don’t last forever and the cracks are starting to show.

The writing has been on the wall since the 2011 Copa America. That was Uruguay’s pinnacle and now they are spiralling down to their anti-climax. Why doesn’t Tabarez retire his old players on a high note and re-model the team while he has the chance? His veterans are playing with concrete in their shoes but Tabarez chooses to ignore it.

While managers on other national teams have developed their teams, Uruguay is getting left behind due to silly obligations. Things are just going to go from bad to worse to worse for Uruguay if they don’t start thinking smart and use their wealth of talent from their junior sides who are managing to reach World Cup finals.

People are left asking: What are Oscar Tabarez’s motives? This team has had so much success and all their hard work to rebuild their reputation as a world class team will be lost if he doesn’t start acting like a coach.

Uruguay has dropped from being number 2 in the world to number 7 in the blink of an eye. How can it be that they are Copa America champions and they may not even step foot in Brazil to compete in 2014 World Cup?

Their recent performance has been embarrassing for everyone watching and will only get worse. It will be a massive disappointment if the La Celeste fails to qualify for the 2014 World Cup in Brazil – the berth where they made World Cup history.

Although their next competitive match isn’t until March next year, people cannot see Uruguay succeeding in their current form. This team cannot realistically win against Paraguay and Chile with Oscar Tabarez’s stubborn tactics and team choices.

What do you think football immortals like “Pepe” Schiaffino and “El Negro Jefe” Varela would be saying about Uruguay’s recent display in performance? They knew Uruguay to have a bullet proof defence and a deadly counter attack. But right now, they would be absolutely shocked. They will be turning in their graves if they saw the turn Uruguayan football has taken, the way their precious national team are playing today.

The real query now is: Can Uruguay escape the Macumba?