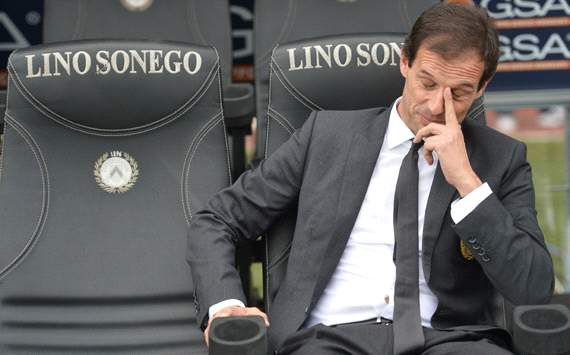 Allegri… on the verge of getting sacked?

This weeks installment of Serie A was a low scoring affair all around however teams made the most of it as Juventus, Udinese, Atalanta, Genoa and Siena were the only teams that secured themselves all 3 points this round.

Round 4 of Serie A started off as Parma hosted Fiorentina in a relatively entertaining match up. Both Fiorentina and Parma were awarded penalties in the second half which we’re both kept out of the net until the dying seconds of injury time when the ref pointed to the spot in Parmas favor giving them the last chance of the game to tie it, and that’s exactly what they did. Midfielder J.Valdés stepped up for Parma and netted their only goal of the game ensuring that both Fiorentina and Parma would have to settle for 1 point each.

Saturdays second game saw current Serie A Champions Juventus play host to Chievo. Juventus started off slowly but finally broke through and made sure that they would come away with all 3 points as Fabio Quagliarella found the back of the net twice in a span of 5 minutes.

Many thought that Juventus would have trouble with Chievo when the manager rested key players like Andrea Pirlo, Andrea Barzagli and Sebastian Giovinco due to their mid week Champions League clash with European champions Chelsea. Juventus played well without these players but at times it was a little slippery. Juventus now unbeaten in 43 Serie A games and are alone at the top of the table with a record of 4-0-0.

Majority of sundays games were played to ties when Sampdoria - Torino tied 1-1, Bologna - Pescara tied 2-2 and Catania and Napoli shared points in a goalless game that almost saw Catania steal all three points near the end of the game.

Atalanta defeated Sicilian side Palermo in the dying seconds of their clash when Raimondi scored in the 88th minute stunning Palermo and giving them something to think about on their ride home. Cagliari and Romas game was postponed as Cagliaris stadium was ruled unsafe for spectators - no makeup date has been set as of today.

Lazio vs Genoa finished 1-0 in Genoa’s favor with Marco Borriello scoring the only goal in that game. In my opinion it should have been Lazio who took the win as for the majority of the game it was Lazio who was putting pressure towards the Genoa goal. Genoa goalie Stephan Frey had a very good game and deserved his clean sheet today.

Moving onto Milan vs Udinese where troubled Milan were looking to settle for nothing less than all 3 points because of their horrendous 1-0-2 start to the Season. There was a lot of talk speculating that if Milan were to lose that Massimo Allegri , Milans manager would be sacked and replaced with another manager who many speculate could be Milan and Italian football legend Pippo Inzhagi.

Udinese took the lead in the 40th minute when Ranegie found the back of the net. Hitting back was Stephan El Shaarawy who tied the game in the 50th minute giving Milan fans some hope. Udinese re-took the lead in the 68th minute and who else but skipper Antonio Di Natale through a spot kick. Milan players Zapata and Kevin Price Boateng were both sent off.

Milan were unable to find another goal giving Udinese the win and with Milans troubles continuing they now fall to 15th place in the table and 1-0-3 for the season.

Other Milan club, Inter Milan hosted Siena in the San Siro where fans were expecting Inter to walk all over Siena but in retrospective got totally the opposite of what they were expecting.

Despite Inter playing what seemed to be an amazing game could not find the back of the net as Siena went up 1-0, and never looked back when Vergassola scored in the 73rd minute. Inter fans encouraged their team to push for a equalizer but in the 88th minute Siena put the final nail in Inters coffin as Valiani scored the second and final goal for Siena.

Serie A Week 4 Player of The Week:

Serie A Week 4 Flop Player Of The Week: