Borussia Dortmund vs Schalke: Bundesliga’s blockbuster return to a sense of normalcy 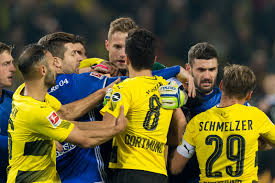 With the European football season gearing up for its conclusion, things came to an abrupt stop, as the Covid 19 pandemic put a halt to not just the season, but to life as we know it.

It’s been a difficult few months, but for football fans, the chance to watch live football, in any format, will be a much needed boost. The Bundesliga is the first of the major leagues that will attempt to give us that, with fixtures scheduled to recommence this weekend. While Germany gears up for a return, it does so with one of the country’s most famous derbies, as Borussia Dortmund and Schalke prepare to lock horns in an empty Signal Iduna Park, in the ‘Revierderby’. The famous yellow against the royal blue is a rivalry that goes back nearly 100 years.

With this weekend’s 156th meeting between the teams being arguably one of the stranger encounters, we can still expect a fiery 90 minutes on Saturday afternoon. With or without fans, the passion to win this game over any other is as strong as ever. And looking back at the history and recent encounters, you can understand why.

The Ruhr district, home to both clubs, sits on Germany’s western edge, not too far from the Dutch border. With a population of 5 million, the region is the largest urban area in the country, and has long been the epicentre of coal and steel production throughout the nation. The population nowadays largely spend their weekdays on the job, and their weekends on the terraces, in this working class, football mad part of Germany. The region is home to several teams in Germany’s top two divisions, including Bochum, Duisburg and Essen. Any matches between these sides are known as ‘Minor Revier derbies’.

It is the cities of Dortmund and Gelsenkirchen however, separated by less than 20 miles, which boast the biggest clubs. And twice a year, both sets of fans put on an incredible atmosphere as Borussia and Schalke play in the Revierderby.

The rival’s first encounter took place in 1925, a match in which Schalke won 4-2. In fact, Schalke’s dominance lasted over a 20 year period, winning 17 of the 19 matches between the sides, including a 10-0 and 9-0 thrashing. Dortmund’s first win came in 1943, thanks to a narrow 1-0 victory. Post war however, the power has switched back and forth between the sides, with both enjoying spells of gloating in the face of their Ruhr rivals.

Since the Bundesliga’s introduction in 1963, the competition has taken on even more importance. Dortmund secured some high finishes in the 60’s, with Schalke scrambling down the lower end of the table. The 70’s saw fortunes change, and while the royal blue half of the region celebrated twice finishing in 2nd, Dortmund were relegated, and spent five years outside the top flight.

After a spell in the 2nd division, Dortmund have rebuilt to become the force they are now. In the last 39 seasons of the Bundesliga, Schalke have only finished above their rivals on 10 occasions. But matches against each other do not replicate these statistics. The Revierderby is a one off, often as unpredictable as the flight of a kite, swaying between the two. Schalke have spent the more recent times looking up the table at their yellow and black neighbours. Yet against them, they step up their game. The fans demand it, and the players give their all to respond. The stats in the Bundesliga era of clashes show how close the games can be to call. In 95 matches, Dortmund have taken 1 more win (33) compared to Schalke (32).

The bitterness runs deep in the Ruhr valley. But buried beneath the hatred, we have seen glimpses of short lived respect between the sides. Schalke’s dominance over Dortmund in the 1930’s, including a 10-0 win, was so attractive in the eye that even the Borussia team couldn’t help but admire it. So much so that when the Schalke train arrived back in Dortmund’s main station, having just won their 1st ever title in 1936, they were given a celebratory welcome, and even escorted to the town hall. In contrast nowadays, even muttering the word ‘Schalke’ in Dortmund’s centre would be heavily frowned upon.

There also was a slim chance that the derby would be no more, as Dortmund plunged into financial difficulties in the 1970’s. Following relegation from the top flight in 1972, 5 years in the 2nd tier brought a loss of income. This also coincided with the opening of their new stadium, Westphalia, which was opened in time for the 1974 World Cup Finals. The cash strapped side played Schalke in the inaugural opening game at the stadium, in front of a packed crowd.

As a mark of respect, and not wanting to see their rivals slide closer to administration, Schalke didn’t take their cut of the gate receipts, and instead ensured that all money from the match was taken by the hosts. It was this gesture that was a key turning point in Dortmund’s rebuild following promotion, as they have invested in their youth system and relied on their home grown players to bring them success, now boasting one of the best academies in Europe.

1997 is also a year that the Ruhr region celebrated together and became the heartbeat of European football. Schalke won their first ever UEFA cup, beating AC Milan on their own patch, in a dramatic penalty shootout at the San Siro. The celebrations on the blue side of the region had barely settled down when less than a week later, Dortmund won the European Cup, beating Juventus 3-1 in Munich. Rivals united, in what was more a victory for German football.

From a fans perspective, it’s clear just how deep the hatred runs amongst the supporters from both of the major cities. So strong in fact, that any links the fans may have, are diminished as quickly as possible. We all know about Dortmund’s famous yellow wall. The freestanding 25,000 capacity South stand is one of football’s greatest sights. Historically, at their old stadium, the ultra fans would always make themselves heard in the North stand. It wasn’t until they moved into their new ground that they switched the ultras to the South stand.

The reason? Schalke had since moved into their new stadium and allocated their ultra fans the North side. Not wanting to share the same side, even by name, Dortmund decided the fans would be in the South.

In many rivalries, you often make jokes about your opponents. That can include referring to even a mention of their team name as ‘bad language’. In the Revierderby, this holds a degree of truth. You may hear fans using the name of a neighbouring town to refer to their rivals, as they cannot bring themselves to mention the name of the enemy. This can lead to Schalke being called Herne-West, while Dortmund may be labelled as Ludenscheid-Nord.

It’s not just on the terraces where the importance of the rivalry is understood. To the players, they can feel the pressure throughout the week in the build up to the clash. For those players who know the Bundesliga, they will understand this is the biggest derby. For those players who are coming into the Bundesliga, and may not be aware of the rivalry, this will soon be made clear at the earliest opportunity. Ex Dortmund defender and boyhood fan Kevin Großkreutz, when once questioned about what he would do if his son became a Schalke supporter, simply replied ‘Adopt him’.

The fire in this derby has been kept burning thanks to some classic matches throughout the years, and has left memorable moments that have only added more fuel to it. In a match in Dortmund in 1969, minutes after Schalke took the lead, several fans invaded the pitch. While police with dogs tried to regain control, one dog bit two Schalke players, who after a tetanus jab, carried on playing. It had been revealed after that the dog belonged to a Dortmund fan, who had dressed as a police officer to get access to the game. Bizarrely in the return fixture, Schalke’s president had borrowed a couple of lions for the day from a local zoo, and placed them pitch side during the game, as a tongue in cheek swipe at their rivals.

History was also made in 1997, as Jens Lehmann became the first goalkeeper in Bundesliga history to score from open play. Trailing 2-1 in Dortmund, Schalke had a late corner, in which Lehmann had come up. The ex-Arsenal keeper was on hand to head home at the back post and secure a dramatic point.

On two occasions, both sides have ended each other’s strong title challenges. In 1991, Schalke scored four second half goals in a 5-2 victory over Borussia Dortmund. That season, Dortmund went on to lose the league to Stuttgart on goal difference, something the Schalke fans will take pride in feeling they contributed towards after their famous win.

Revenge is sweet, and Schalke found out the hard way in 2007. Schalke were on course for their 1st league title in 49 years, as they led the Bundesliga with two matches to play. However, a 2-0 defeat away to Dortmund saw them fall into second place, where they finished, despite leading for more than 4 months of that season. Dortmund fans relished in the collapse of their rivals season, as shortly after a plane was flown over Gelsenkirchen with the message “A whole life without a German league title“.

True football fans will remember the match that took place in Dortmund in 2017, which went on to be nicknamed ‘The mother of all derbies’. Borussia stormed into a 4-0 lead after just 25 minutes, and it looked like a damage limitation for Schalke. A comfortable Dortmund win, right? Wrong.

Schalke found something inside, as they unleashed a royal blue revival that nobody in Signal Iduna Park, the Ruhr valley, or even watching around the world, could quite believe. After reducing the deficit to 4-2, Dortmund then had Pierre-Emerick Aubameyang sent off. Schalke scored a 3rd in the 89th minute, and in the 93rd minute, Naldo’s powerful header levelled the score at 4-4. Cue wild celebrations from the visiting fans, players and staff, as if a league title had been won. But that’s how much it means.

Dortmund haven’t beaten Schalke at home in the last three occasions. Last season, Schalke left with all three points, in a 4-2 win that put a big dent in nine-man Dortmund’s pursuit of Bayern Munich in the Bundesliga title race.

Germany has some of the best atmospheres in European football, with pre-match tifos, giant flags being waved, flares being set off. This derby provides a hostile occasion that cannot be experienced in many other stadiums around the world. This weekend brings a new chapter to the Rivierderby, and despite a stadium with no fans, this encounter will still be a passionate and tense affair.

Heading into the game this weekend, Borussia are four points behind leaders Bayern Munich, and have the opportunity to reduce the gap to a single point before Bayern’s trip to Union Berlin on Sunday. On the other hand, Schalke are in 6th spot, leading a group of teams for the final European place. They come into this game without a win in nine matches, but as we’ve seen in past encounters, anything can happen.

Working class fans are being pushed aside by many clubs to make way for the executive fans and businessmen in this money-centered footballing world. This rivalry however is traditionally all about the working class fans, as they prepare to face off and take the bragging rights in the heart of Germany’s industrial valley.

Related Items
← Previous Story The Toon Tribune: Why Newcastle fans are desperate to see the back of Mike Ashley
Next Story → Graeme Souness’ Criticism of Pogba — A Masked Jealousy