Unai Emery Must Instill An Identity To This Arsenal Team 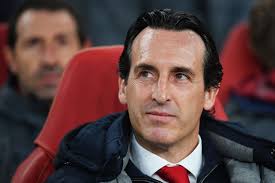 Arsenal has had an illustrious list of managers since its formation. Managers like Arsene Wenger, George Allison, George Graham and Stewart Houston have all taken charge of the club and led it to varying degrees of success. The managers made their names through their trophy hauls and playing styles.

The most recent on the list is Arsene Wenger. The former Monaco tactician arrived at Highbury after a spell in Japan coaching Nagoya Grampus to two titles. Many gooners did not have faith with the tall Frenchman’s appointment in 1996. However, minimum expectations yield the least disappointments as they say.

The Frenchman took a season and a half to settle into English football after which he revolutionized it in ways many never thought possible. His style of play has been heralded as one of the best by a European team. The Frenchman changed dieting and sporting routines of his team and the success was visible on the field.

He collected three Premier League titles, seven FA Cups and a further seven Community Shields between 1996 and 2018 eclipsing the record of George Allison as the longest serving Arsenal manager and also the most successful. The icing on the cake for a legacy built on scouting brilliant young talent and playing expansive attacking and entertaining football came when Arsenal played the 2003-04 season without losing a single match. In fact the team made it to 49 unbeaten matches in the Premier League, a record still intact.

When Unai Emery was appointed, neutrals viewed this as an upgrade on Arsene Wenger who had done extremely well until 2006 but waned towards the tail end of his tenure. The Frenchman’s arsenal had become predictable, lacked a spin and turned into a flat track bully. The Frenchman had also failed to assert dominance on the continental stage as minnows like Monaco, Leverkusen and Porto made their way to the champion’s league final. Unai was supposed to be the antidote. He looked to be the man with the pedigree to instill a competitive edge in the team, train the group the modern way and grind out results at rival teams. With multiple domestic titles in France with PSG and an impeccable Europa League CV, Arsenal and Unai looked a match made in heaven.

Unai’s first season saw him make it to the Europa League final and miss the top 4 by a point in a domestic season where he had accrued three more points than his immediate former predecessor.  The season’s outcome drew mixed reactions with some calling for his head and some exercising patience given the team was pretty much Arsene Wenger’s. With now three transfer windows, Unai has been allowed to bring in players who match his philosophy. Players like Guendouzi, Tierney, Leno, Torreira, Socratis, Ceballos, Pepe, Luiz, Martenelli have all been brought in at the request of the gaffer.

Yet one thing still evades the Spaniard: identity. The current Arsenal team cannot be exactly described as a counter-attacking team and neither can it be described as a possession-based attacking team. Arsenal fans endured years of trophilessness under Wenger but never had to worry about the football on show. The intricate passing, sleek movement and brilliant build up play were all ingredients of Wengerball and to be fair Arsenal never really played too many games where they were completed dominated by the opposition apart from when they faced Pep Guardiola’s Barcelona and Bayern Munich.

Unai Emery has once been quoted saying his philosophy for this Arsenal side revolves around making the side a chameleon team whereby opponents keep guessing if Arsenal will be dictating play or playing on the break. Quite frankly, this is difficult to achieve. Imagine training counter-attacking football this week and setting up to control possession the next one. In trying to do both, Unai is failing terribly at achieving any.

Elite managers have found a playing style and stuck by it. Jose Mourinho has won 26 trophies in four countries playing with defensive astuteness, while Pep Guardiola has won 28 titles in 11 years playing attacking football. In fact, coaches go into a match against a Mourinho or Pep side knowing exactly how they are going to play, but still fall short. This is because they have picked a method and refined it over and over. In Unai’s attempt to turn Arsenal into a chameleon team, the Spaniard has compromised so much on the brand of football his predecessor set. Quite frankly, Arsenal is boring to watch these days. The team is often sharing possession even with relegation threatened teams at the Emirates.

Sadly, the boredom hasn’t exactly translated into great results as Mourinho enthusiasts would remark. Arsenal’s lack of sustained spells of possession has meant the team has become more vulnerable to opponents attacks. As Guardiola once noted, defending with the ball is an effective way of making sure you don’t concede, after all the opponents can’t score without the ball.

This situation has left Unai with a less spectacular team with nothing substantial to offer yet most of these players are those he vouched for their signatures. This is a crucial season for the Spaniard who by now knows the chances of winning the league are minimal with the Carabao Cup hanging in the balance after being drawn against a team that elicited the cowardly side of him at Anfield last month.