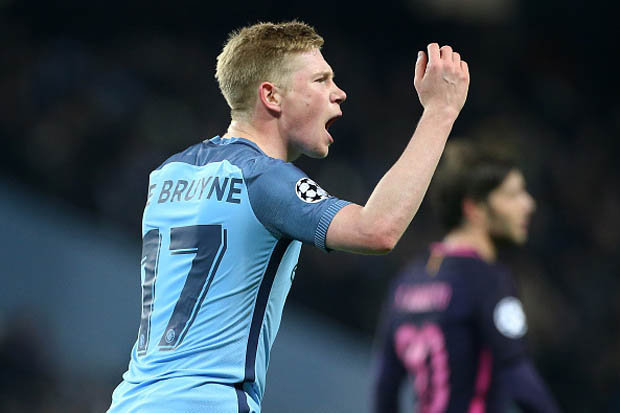 Football is many things to many people.

There is of course very little point in ranking players, but who cares? It’s fun. So, with the season halfway through what better time to ask: who is the best player in the Premier League?

6 players from England’s top 6. But only one can rule. Who will it be? I already know, but you’ll have to read on. Unlucky.

Harry Kane has had a spectacular 2017, breaking the Premier League goal scoring record for a calendar year, becoming the first Premier League player to score back to back hat-tricks on two separate occasions and finishing the year with the most goals for club and country in Europe, ahead of Messi, Ronaldo, Lewandowski and Cavani. Decent.

When Kane arrived on the scene he felt like a flash in the pan, but two Golden Boots later, Kane sits just 3 goals off Teddy Sheringham’s all-time Premier League record for Spurs. Kane is rightly the most feared striker in England, and with 6 goals in 5 Champions League games, he is shifting his focus a little wider.

Stan Collymore did chime in the other day to argue that Kane is not truly world class yet, but on the balance of things, that is Stan Collymore, so no one needs to pay too much attention to that particular argument.

Yet for all of his exploits and his newly acquired world class status, Kane’s Spurs side sit 5th in the League. Will we see the Premier League’s best player in the Europa League next year? One way or the other, I doubt it.

When it comes to making an impact at a new club, you don’t get much better than Mohamed Salah’s at Liverpool.

With 23 goals in all club competitions, Salah has scored more goals than 8 Premier League sides, while his tally of 23 goals in 29 games before the new year is a record matched by only one Liverpool player in history, that man being Roger Hunt (I hadn’t heard of him either).

With his electric pace and uncanny knack of getting into goal scoring positions, Salah has been ripping defenders some new ones all season so far, being directly involved in more goals than anyone else this season and as a winger he has only one goal fewer than Harry Kane.

However, the mind can only boggle when you consider just how many goals Salah might have scored if he could actually finish.

Watching on it seems as though he needs three clear cut opportunities to pop just one in the back of the net. With some rudimentary mathematics that means that the newly proclaimed ‘Egyptian Messi’ (thanks for that Ian Wright), should be sitting on a very tidy, 51 goals. Not bad eh.

Of course, Salah deserves credit for fashioning such an absurd number of chances, but his wastefulness makes it difficult to justify putting him right at the top of the tree.

There is no denying that the diminutive Belgian is a joy to behold.

Hazard glides past players of all abilities with an effortlessness that conjures images of falling into a bed of soft scented roses a-la American Beauty. Hazard is Chelsea’s best and most important player, but at the same time haven’t we all been waiting a little too long for him to really turn it on?

Now in his 6th year at Chelsea, Hazard has won two Premier League titles and the League Cup, scoring 63 goals in 192 games. His record is good, but is it great? And has he ever truly been the dominant force that marks a player like Ronaldo, Bale or Suarez out as the best the League has to offer?

Hazard is fantastic, but I don’t think he has.

There are some players for whom the stats don’t tell the full story, players like Eden Hazard, and then there are others for whom a simple reeling off of stats tells a story compelling enough to sit atop the New York Times best seller list for weeks on end.

Playing against Arsenal earlier this season, De Gea equalled a Premier League record for the number of saves made in a match, making 14. This season the Spaniard has made the second most saves in the Premier League, while his side has conceded the second fewest, alongside Chelsea.

Between 2012 and 2015 De Gea won Manchester United’s player of the year award three times in a row, while he also won Match of the Day’s save of the season each year between 2013 and 2016. Furthermore, ‘Dave’ has also been named in the PFA Team of the Year in 4 out of the past 5 years.

Inexplicably, in FIFA’s 2017 list of the best goalkeepers in the world, De Gea didn’t even make the top 10. But what do FIFA know?

When it comes to the Ballon d’Or, it is generally the best player on the best team that ends up with the gong. It’s a logical way of deciding things, even if it is a bit reductive. And if you took the same approach to the Premier League, you would surely end up with Kevin De Bruyne.

Signed from Wolfsburg for a cool £55m, De Bruyne has been simply sublime this season becoming the quickest midfielder in Premier League history to be directly involved in 50 goals, doing so in just 76 games.

Of further note is the increasingly apparent fact that De Bruyne is indestructible, recovering from a truly horrific ankle-snapper from Dele Alli to score against Tottenham, before being stretchered off against Crystal Palace, leg in a brace, to feature in City’s very next game, a game in which he became the first player in Europe to register 10 assists.

It is also worth noting that Palace’s Jason Puncheon and Scott Dann have been ruled out for the remainder of the season for injuries sustained in separate fouls on Kevin De Bruyne. Now that is impressive.

Manchester City’s stellar side is stacked full of superstars, but is any so supremely talented and devastatingly effective as Kevin De Bruyne? The Belgian has been happily tearing the Premier League’s smaller teams apart whilst also playing a telling part in City’s crunch games, scoring memorable goals against both Chelsea, Arsenal and Tottenham and providing 2 assists against Liverpool.

In the most recent Ballon d’Or standings, Harry Kane was the only representative from the Premier League in the top 10.

The English striker is certainly one of the best players in the Premier League and destined to be one of its all-time greats. But when that same list comes around next year, expect it to be Kevin De Bruyne offering the most concerted challenge to break the Spanish stronghold on the award.

For he’s a jolly good fellow and he is the best player in the Premier League.