Why Wigan Athletic are about to create more FA Cup history 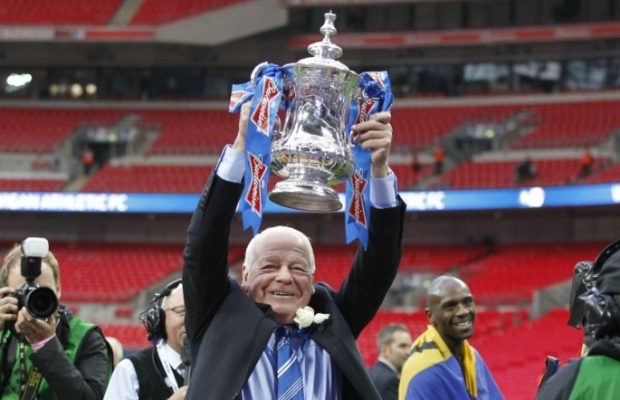 The year is 2013, people take to the streets to burn hastily prepared effigies of Margaret Thatcher to mark her recent death, all to the tune of Daft Punk’s Get Lucky and Robin Thicke’s Blurred Lines. Over in Russia 1,000 people are injured by a meteorite. And in the home of football, Wembley Stadium, Wigan take to the field against Manchester City.

The tale is certainly one of David and Goliath. Manchester City, title winners the previous season, have already lost the chance to retain that particular piece of silverware and with the club’s hierarchy demanding trophies and lots of them, Roberto Mancini’s star-studded team will no doubt be itching to utterly steamroller whoever has the audacity to stand alongside them in the pre-match tunnel.

Wigan on the other are a sinking ship, with two games remaining they sit in the relegation zone. A club that had defied logic for so long, riding as high as 10th in the Premier League, which they did in 2006, backed by their loyal army of 12 fans, were grappling with the reality that although bees fly, there is no scientific reason to suggest they should.

But what does form count for in football? Nothing, that’s what. The 2013 final produced one of the most memorable outcomes in the cup’s history. Just as the board announcing 3 minutes of added time was raised, Ben Watson, who had recovered from a broken leg sustained earlier in the season, connected with Shaun Maloney’s near post corner, flicking the ball past Joe Hart and into the back of the City net.

It wasn’t supposed to happen. But it did. That moment became Wigan’s first major trophy in their 81-year history. 2 weeks later, Wigan became the first side to win the FA Cup and get relegated in the same season. It didn’t make any sense, but at the same time, it made perfect sense. This was the magic of the FA Cup, and Wigan Athletic were wallowing in it.

The year is 2014, Wigan are back in the Championship for the first time since 2004. After losing highly regarded, but generally underwhelming manager Roberto Martinez in the summer and with James McCarthy and Arouna Kone following the Spaniard to Everton, Wigan have a bit of a rebuilding job to do.

With December comes the sacking of Owen Coyle, the Latics sit 14th in England’s second tier. He is replaced by Manchester City legend Uwe Rosler who mounts a strong resurgence as his side eventually end up in the Playoff Places. Sam Smith and Ed Sheeran rule the charts and as Rosler threatens to return Wigan to their rightfully wrong place in the Premier League, a little more Cup magic is brewing.

Wigan’s FA Cup campaign gets off to an inauspicious start with a draw against MK Dons, at 3-3 it’s an entertaining game, but no one’s giving the side a hope in hell of retaining the trophy they so inexplicably won the season previous. Not only were they massive underdogs last year, they’re even worse this time around!

However, fast forward 2 months and 4 rounds and Wigan find themselves in a Quarter Final facing their old foe Manchester City. What do they do? They knock them out of course, winning 2-1 and sparking genuine concern that there might be a repeat of 2013 on the cards.

That concern is only heightened when Wigan take the lead in their Semi Final against Arsenal, Jordi Gomez scoring from the spot and although the mighty Gunners equalise through Per Mertesacker, Wenger’s side just can’t get through the Latics, a side packed full of cup winning talent like Callum McManaman and Emerson Boyce.

Arsenal eventually get the better of Wigan in the ensuing penalty shoot-out, going on to win their first trophy in 9 years in the final, but if Arsenal won the battle, Wigan won the hearts and minds (and you only have to look at Vietnam to know that’s the hard part).

Those two years represented something magical for Wigan Athletic as a club, earning their first ever major trophy and bettering the Goliath that is Manchester City not once, but twice, while also taking Arsenal to penalties, despite their side getting worse. But that was then and this is now.

The year is 2018. Drake tops the singles charts with God’s Plan. Theresa May is doing her best to impress billionaires in Davos, and in League 1 a kraken is stirring. Having already made a false start at a resurgence back in 2016 (with promotion to the Championship leading to an instant relegation back out of it), Wigan look half decent.

Sitting atop the League 1 table, Wigan are two points clear with a game in hand over closest challengers Shrewsbury town. Not only is Will Grigg on fire, but Nick Powell, scorer of 11 league goals so far, is displaying the sort of promise that saw Manchester United sign him as a teenager. Wigan also have a midfielder who goes by the name Max Power, and that’s all that needs to be said about that.

Importantly though, in spite of Wigan’s league heroics, it is in the FA Cup once again where they are threatening to be the story of the season. A third-round tie against Premier League Bournemouth saw the Cherries dispatched 3-0. A fourth-round tie against even better Premier League opposition in West Ham left David Moyes’ side spitting feathers, or just rather spitting, at the 2-0 loss they were handed.

But will Wigan care? Will they ever. This is just the latest chapter in a recent history of underdog battles. Twice before Wigan have sent Manchester City packing and of course everyone will bet against them doing it again, but don’t be surprised if there’s a surprise.

Will Grigg’s on fire and Wigan are going to win the FA Cup. You heard it here first.