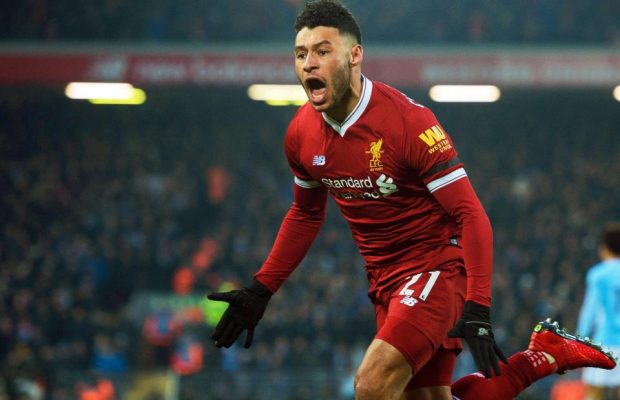 This Sunday Alex Oxlade-Chamberlain wheeled off to celebrate with the Kop after finding the bottom left corner of Ederson’s Manchester City goal with a typical striker’s finish. The 24-year-old gave Liverpool the lead in the ninth minute of the game against the unbeaten Citizens.

That goal was the ‘inauguration’ of a seven goal thriller which saw Manchester City lose in the league for the first time this season. Where else it could have been other than Liverpool’s Anfield stadium right?

While Pep Guardiola’s men not being able to be Invincibles and Liverpool winning despite the departure of their number 10 Philippe Coutinho are very important talking points, I would like to talk about something else.

On the deadline day of the last summer transfer window, Alex Oxlade-Chamberlain gave his first interview as a Liverpool player after moving for a fee of 35 million Pounds from Arsenal.

It has to be noted that the English international rejected Premier League champions Chelsea to move to Merseyside. The former Southampton player was praised by one set of Liverpool fans for his decision, while another set criticised the club for buying an ‘average’ player for quite a big amount.

The last game Oxlade-Chamberlain played for Arsenal was in a 4-0 loss against Liverpool. After joining the Merseyside club a few days later, the first game he played for them was in an embarrassing 5-0 defeat against Manchester City.

Liverpool couldn’t manage to win for four consecutive games and I remember Oxlade-Chamberlain getting trolled for that (as if it was all caused by him).

The player moved away from the Emirates and also rejected Chelsea because he believed that he could get more playing time in his preferred position, central midfield, at Liverpool than the other clubs.

However with Coutinho, Adam Lallana, Emre Can, James Milner, Gini Wijnaldum and Jordan Henderson already in the Liverpool squad everyone thought that Oxlade-Chamberlain has got his decision wrong.

The best he can get is to be backup to the team’s midfield and attacking unit was what everybody believed to happen. But now when we look at the player, it is hard to not say that Oxlade-Chamberlain has proved most of us wrong.

The first time the Liverpool fans were really impressed with their deadline purchase was actually off the pitch when he stepped up and answered to a Barcelona related question that was asked to his then teammate Coutinho.

Liverpool revived their season after a shameful 4-1 lose against Tottenham Hotspur almost three months ago. During this period, Chamberlain also was getting better and better but the fans and pundits failed to see the change in the player.

On New Year’s Day, Liverpool got a hard earned victory 2-1 against Sean Dyche’s Burnley. Sadio Mane gave his team the lead in the 61st minute of the game with a sweet striker.

Since then, Liverpool was busy giving their fans heart attacks. After having their hearts in their mouths for just above 25 minutes the fans were set to take down their frustration on social media when the Clarets’ Johann Berg Gudmundsson scored the equaliser.

Even though Liverpool showed intend after the goal, the game was thought to be over as everyone was aware of how difficult it was to score against Burnley. Only thing that could happen was the underdogs scoring another goal to cause further setback to Liverpool.

But..But, Dejan Lovren and Ragnar Klavan of all Liverpool players had other plans. In the final minute of the injury time of the game, Lovren headed the ball towards the goal and Klavan got to the end of it to make sure that it went inside the net (this time the opposition goal for a change).

The Liverpool fans erased all the rants that they had made ready to post on their social media accounts immediately after the final whistle and came up with appraisal for their defenders who had given them a thrilling victory.

Amidst all this, the fans again missed the role played by Chamberlain in that winner. It was the so called ‘average’ player who delivered the free-kick to Lovren that soon resulted in the goal.

The player’s set-piece delivery has been really impressive, but has gone unnoticed just like his improving performances.

When I was left frustrated at the fact that he was not getting enough credit for his improvement as a player since his arrival at the club, Oxlade-Chamberlain was not ready to give up.

In the Merseyside Derby that took place just four days later a similar situation emerged. Liverpool took the lead through a James Milner in the 35th minute only to give it away in the 67th minute.

This game was also the debut of Liverpool’s most expensive player, Virgil van Dijk. He could not just let his first game be a disappointing draw, is it?

So the Dutchman decided to make his mark in the 84th minute of the game by rising high above the Everton defenders to connect to a corner delivered by Oxlade-Chamberlain. The defender was successful in his attempt as his header resulted in a Derby victory for Liverpool at Anfield.

The next day, van Dijk made the headlines of newspapers. It was a dream debut for the former Southampton player. The player was already treated like a club legend. Anyone who scores the winning goal against the team’s derby rivals on their debut is always treated so right?

I bet that every Liverpool fan had a smile on their faces or atleast they were laughing at Everton after they saw photos of van Dijk celebrating his goal in newspapers and social media. I was smiling as well, but not for van Dijk. I was smiling by looking at one of the men celebrating behind the big Dutchman.

“Again someone else has got all the spotlight Ox”, I told Chamberlain in my mind.

With every passing game I was starting to believe that he is not going to get credit for his contributions, but Chamberlain was not ready for that. He is not a sadist like me.

He has that never give up attitude that qualifies him to be a Klopp player.

After the derby, it was time for a setback for Liverpool. ‘Ole Ole Ole, Coutinho-o-o-o’ was no longer going to be chanted at Anfield as the the Brazilian joined his dream club Barcelona for an astronomical amount.

Liverpool were preparing to face the unbeaten Manchester City at home and this transfer was in no way going to help the confidence of the team.

Well, that is what the fans thought. All that the fans could think about was who is going to replace Coutinho and how is the club going to spend the amount received with the sale of their number 10.

But Klopp and his boys were looking forward to their big match against City, and were busy preparing for the game rather than watching Coutinho’s presentation at Camp Nou.

This was quite evident from the statements made by Chamberlain before the game. His interview showed the fans how confident the team was. The former Arsenal player did not talk like a player who just joined the club this season, but like a man who wants to help his team in anyway possible.

He proved that in the game as well. Chamberlain was one of the three-man midfield, of which Coutinho was no longer a member of.

In the nineth minute of the game, the 24-year-old received the ball from Roberto Firmino and made a run towards the Manchester City penalty box. The Citizens’ defender Nicolas Otamendi was dragged to the wings by Mohamed Salah, which gave Chamberlain more space to run.

The player then struck the ball with quite some power from just outside the penalty area and made sure that he rattled Ederson’s goal before running to celebrate passionately with the Liverpool faithful.

After the match, Chamberlain has revealed something that has increased my respect for him even more. The player has said that he did not celebrate his goal against Swansea at Anfield last month properly because he felt he didn’t deserve to score that day.

However, the player did not hold himself back this sunday as he celebrated his goal in front of the Kop in the best way could do.

The goal was not the only big contribution Chamberlain made against the Citizens last weekend. The Liverpool number 21 also assisted Roberto Firmino’s goal, which very much resembled Robbie Fowler’s finish against Manchester United in 1995, in the second half.

The former Arsenal player was rightly awarded the man of the match award after the game.

More and more Coutinhos will leave Liverpool in the future, but as long as there are players like Chamberlain who are willing to give their all for the club they play for, I believe in my team.

All Chamberlain asked for was playing time in the central midfield when he joined Liverpool and he has proved us why he asked for it now. The Reds’ manager Jurgen Klopp also requires credit for his top class player management.