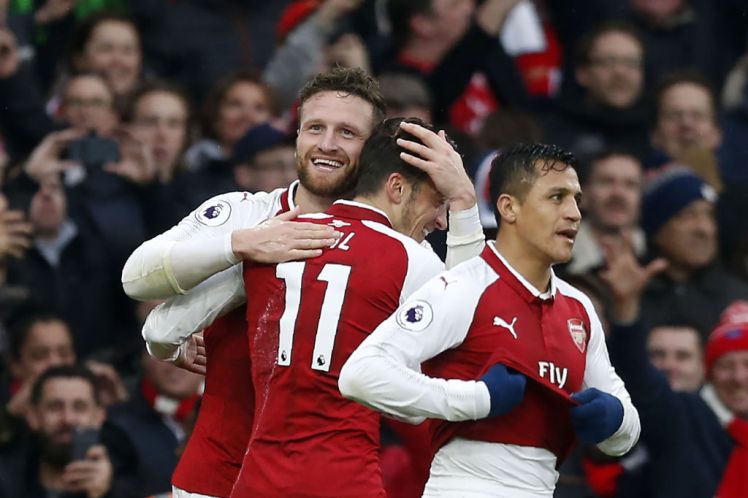 On Saturday, Arsenal not only recorded a 2-0 victory over their derby rivals but also put on their best performance of the season.

The Gunners set the tempo early on and swarmed Spurs’s robust defense until it finally cracked. The visitors couldn’t keep out the trio of Alexis Sanchez, Mesut Özil and Alexander Lacazette. The three most expensive signings of the club showed what they are worth when fielded together, making Wenger’s decision to rest Lacazette against Man City two weeks ago even more bewildering.

On the other end of the pitch Tottenham’s famed attack force couldn’t get past the resolute Arsenal back line, which was bolstered by the return of Shkodran Mustafi . The German has been out for most of the campaign with injury sustained during international duty. His return is a welcome sight for Arsene, who was forced into using the aging Per Mertesacker and the out of position Sead Kolasinac in his stead.

Mertesacker is a calm leader whose passing abilities are second to none but his pace or lack of it has always been a reason for concern. Kolasinac on the other hand has shown that he is one of the best wingbacks in the league when deployed in his favourite role. The return of Mustafi will not only sort out the line up but also enables Arsenal to finally have a best 11 they can trust.

The former Valencia man was tasked with keeping out Harry Kane which he executed well. In addition he managed to break the deadlock with his sumptuous header. Mustafi’s ability on the air is no secret and it will make Arsenal a threat from set pieces.

The derby win is a big confidence boost for Arsenal. The question is will they be able to build from it? The new found belief can easily be shattered by a loss and this is where the manager and players should proceed with caution.

Talks of a title race may seem premature after a single win and because Man City look unstoppable at the moment. However, Arsenal are more than capable of displacing the other teams to secure a direct Champions League qualification spot.

The Europa League offers them a chance for silver wear and who knows? If they can replicate Saturday’s performance on a weekly basis we will be talking about them bringing home their first league trophy for the first time since 2004.

Arsenal have been criticised for not having enough fight and heart in their game but that’s exactly what they had on Saturday. Following the game Mustafi defended his team from such critics. The defender had this response when asked if he was close to leaving Arsenal in the summer.

“You like to get the s***, the biggest s***,” “What happens in the changing room is the real thing. I have been talking to clubs or if I haven’t, it’s only rumours. I’m here; I’m standing in front of you in an Arsenal shirt.”

“As always, Arsenal is dead, Arsenal is not coming back. We always are alive, we always believe in ourselves but we all know that if you win the big games but lose the small games you’re not going to finish top of the league or even in the top four. If you win today and lose next weekend you are back where you were.” (Quotes from the Telegraph)

Along with their exciting attacking trio, Mustafi offers Arsenal a reliable defensive unit which can step up in the big games. And the magic formula for future success will always be consistency.

Related ItemsArsenalarsenal fcmustafio-postsPremier Leagueshkodran mustafi
← Previous Story The Toon Tribune: No need to worry for Newcastle after Man United defeat
Next Story → Why the Chelsea rejects are lighting up the Premier League