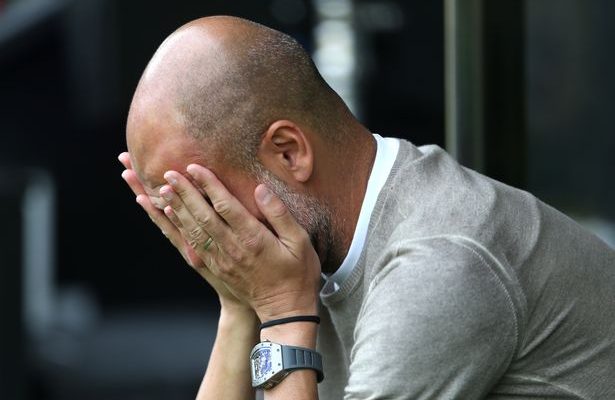 First City lost 0-1 to Manchester United in the Carabao cup second leg after a 3-1 win in the first leg, then the team went on to lose 2-0 to Mourinho’s Tottenham Hotspur. Many have called the former a Jose Mourinho masterclass against Pep Guardiola but in fairness this match was nowhere near the 2010 Champions League winning heroics against Pep Guardiola’s Barcelona in the knockout stages while the Portuguese managed Inter Milan.

Fundamental difference lies in the fact that Tottenham could either have won this game or lost by an embarrassing margin. The game was more open that Mourinho craves against Guardiola’s charges. Manchester City’s inability to convert from the spot is another growing concern in a game where taking the lead would have given them momentum to completely destroy the hosts. It also did not help City’s course when Zinchenko was sent off for two bookable offenses in the second half.

So what exactly has been the genesis of this wastefulness in front of goal? Firstly, Manchester City have been unable to convert penalties with convincing regularity. Mahrez, Gundogan, Sterling, De Bruyne, Aguero and Jesus have all attempted and failed to convert from 12 yards within the past year or two.

This situation has left City in a very uncomfortable position across competitions; Aguero’s miss against Spurs in the Champions League effectively took them out of the competition, Gundogan’s miss against the same opposition allowed them to take all three points.

Mahrez’s miss against Liverpool cost City a chance to have the longest unbeaten run record stretched and together with an unprecedented points tally. All in all the misses have proven very costly and if Pep Guardiola believes Ederson is the best penalty taker in the squad, then the Brazilian should take over the spot kick duties immediately to forestall avoidable losses.

Secondly, the Manchester City attack has waned with Aguero the main source of goals in the last few months. Unfortunately, the Argentine has also been injured at different times limiting his contribution. City have called on Aguero to bail them out against Sheffield and Crystal Palace. Goals from midfield in the league have greatly reduced, Aguero’s strike partners have been quiet while the occasional centre-halves’ headers have been hard to come by.

While the Premier League has watched the likes of Van Dijk, Rudiger, and Mina score goals that make a difference City have failed to have one of their own join this list for the better part of the last few months. In attack, Sterling has never looked the same ever since he clashed with Joe Gomez at Anfield in the Premier League. His return in front of goal has been paltry since then. Mahrez has been in good form recently but his brilliance hasn’t necessarily translated into goals. Bernando Silva continues to blow hot and cold this season, unlike this quality top sports betting app, and so does Jesus.

In midfield, De Bruyne continues to create, the Belgian is arguably the only player in the team capable of world-class delivery to his forward line on a consistent basis. But even he has been dismayed at the number of chances the likes of Sterling and Jesus have thrown away after his spot.

The Belgian has amassed 15 assists in the league this season which is the highest so far but you can be forgiven for stating that he could have had more had his forwards been a bit more clinical. David Silva remains mercurial but with his age, the physical demands of the premier league force him to contribute sparingly. Gundogan for all his impeccable passing is not the most creative attacking midfielder City needs on the left side of De Bruyne’s half space.

For Manchester City now, the priority will be to give some of the out of sorts’ forwards a rest to rediscover their best form after the winter break. The club will also hope to keep all time club top scorer Sergio Aguero in peak physical condition in order to reap maximally from his exploits. Some of the players like Sterling could be having a bad patch due to playing too much football. A rest will not only rejuvenate but also provide much needed freshness which could potentially reduce chances of the player getting injured.

In midfield, Pep may have to play De Bruyne and Rodrigo with Bernando Silva in order to increase his side’s potency and chance creation ability. Bernado Silva will provide bundles of energy coupled with drive, guile and silkiness. It is relentlessness coming out of this that might increase the goals and assists in the final third.

With a clash against Real Madrid on the horizon, Guardiola will have to get his acts together in the shortest time possible. The 13 times European Champions will be tough opposition, this is especially due to their inability to progress last season after being handed minnows Ajax. City will have to be wary of the quality within this squad and hope to convert all their chances and penalties in the two games to progress in Europe.

The Premier League title is six games away from being declared officially over with City nowhere near contention, therefore, it is the humongous clash with Real Madrid that will make or break them this season.

Success here and ultimate victory in the competition will not only cement Guadiola’s legacy in Europe with the Blues but forever etch the player’s names in Manchester City’s history. They all will want to be there.