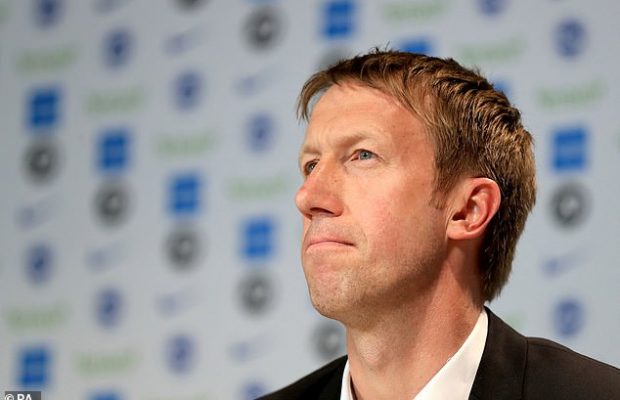 Just four weeks ago Brighton & Hove Albion were looking up towards the top end of the table from a comfortable position in the middle, one month on the club are looking like they are to be heading into a relegation battle once again for the remaining three and a half months of the season.

Having dispensed with the services of Chris Hughton at the end of last season the arrival of Graham Potter heralded a new dawn at the Amex, a bright up and coming English manager but who had been in the dug-out for just twelve months previous at Championship outfit Swansea other than a spell in Swedish football.

It’s fair to say that the Seagulls have promised much this season with a change in style but stuttered on their progress. After an opening day emphatic win over Watford, the season has since been a stop-start effort having to wait until the beginning of October for their next three points with a comfortable win over a poor Tottenham Hotspur side.

So far this season Brighton have only managed back to back wins once and are finding that they can’t pick up the points against those sides around them which is crucial in maintaining Premier League status.

Last time out they suffered defeat at South Coast rivals Bournemouth who themselves are in that relegation battle but completely outfought the Seagulls and left Potter looking over his shoulder at the teams behind them starting to catch up quickly. That loss made it just two wins from their last ten league games whilst in contrast to that Watford have picked up fifteen points to put pressure on all the teams at the bottom end of the table.

Ever since winning promotion to the top division, Brighton have struggled to hit the back of the net. There are teams who have scored less than the Seagulls, but in some cases have gained more points as a result. Whilst Neal Maupay has seven goals as top scorer to his credit, underneath him is where the problem lies, Aaron Connolly, Leandro Trossard and Adam Webster have just three each, Connolly having scored two of his three against Spurs back in October underlines the issues in front of goal.

The big Achilles heel this season as mentioned has been the inability to take three points off the clubs below them, while they wouldn’t expect to be beating the likes of Manchester City or Liverpool every week, and no disrespect to the clubs around the Seagulls but those are the games that will provide the wins for the club to stay in the Premier League.

Some noted at the beginning of the season that Potter’s appointment was a gamble for someone with no top-flight experience in any of the big leagues across the world, but a change was needed away from cautious football under Hughton, but there has to be a better balance at times in this division. Not every game will result in a scoring masterclass nor a resolute defensive display, that’s the beauty of getting the tactics and personnel right for each game.

The fixtures fall quite nicely for the club over the next four weeks with three out of the next four games coming against sides around them, vital fixtures that must be completed with three points as a result to ease the pressure.

With a gap now of five points to the next five teams above them and only two points clear of the relegation zone, a six point return must be the minimum to hopefully create some breathing space. A failure to reach that small target could well make for an uncomfortable few months for Seagull fans.

Related Itemsbrighton hove and albionhughtono-postspotter
← Previous Story Is Dean Henderson Going To Be Manchester United’s Number One Next Season?
Next Story → Everton under Ancelotti: A promising work in progress