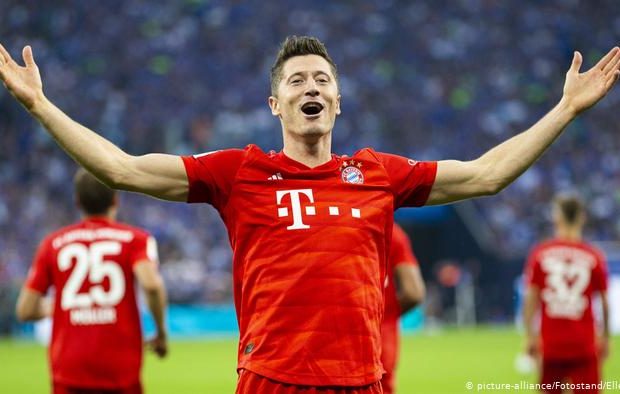 When a young Robert Lewandowski announced himself to the Bundesliga in 2010 from Lech Poznan, not many envisioned greatness from the Pole. Borussia Dortmund had paid a paltry fee of €4.5 million to bring the striker to Signal Iduna Park and he never disappointed.

Brought in initially as Lucas Barrios’ understudy, Lewandowski did not take long to establish himself as the outright starter in the team. The 6 ft 1 striker was mostly deployed by Jurgen Klopp in front of an attacking trident to lead the line on his own and his efforts did not disappoint. In his 4 seasons at the club, the Pole notched in 103 goals in 187 appearances after which he moved to bitter rivals Bayern Munich on a bosman transfer.

At Bayern Munich Robert Lewandowski has taken his game to a whole new level. The Poland captain has scored 40 goals or more in each of his last four seasons for the Bavarians in all competitions making him a darling to not only his current coach but former coaches such as Pep Guardiola, Jupp Heynckes and Niko Kovac.

So what makes Lewandowski special in an age marked by brilliant attacking talent and the extra-terrestrial abilities of Ronaldo and Messi?

Lewandowski’s consistency at the top level has been a thing of beauty. The Pole scored 42 goals in the 2015-16 season and has followed that up with 43, 41 and 40 in the subsequent seasons. This season, the Poland captain has already scored 30 goals in 25 games at the midway stage of the season, it is forgivable to predict a 50-goal season for the Bayern Munich front man given his early season exploits. This consistency has earned Robert seven Bundesliga titles, a 2016-17 Bundesliga player of the year award, four top scorer awards in the German division, a fourth place finish in the 2015 FIFA Ballon d’Or awards and seven straight Polish Player of the Year awards.

The Poland national team has benefited greatly from the exploits of their tall striker. In 112 appearances, Lewy has managed 61 goals. During his time in the national team, it has qualified for the Euros and the World Cup with minimal fuss. Lewandowski has led from the front in securing qualification for his country.

Lewandoski’s number’s superiority has been a reason Bayern Munich has refused to let go of their elite striker. In the last decade, only Messi (522 goals in 521 games) and Cristiano (477 goals in 489 games) have scored more than Lewandowski’s 324 (in 454 games). This means that the Bayern Munich striker still leads the likes of Cavani (309), Suarez (303), Aguero (280) and Ibrahimovic (251). In the 2019 calendar year, Lewandowski was the highest scoring European player with 36 goals pipping Messi (32) together with Aguero and Mbappe at 29 apiece.

Lewandoski remains the only player to score 5 goals in a match after coming on as a substitute since Opta started gathering statistics. His conversion in front of goal has meant that he now sits at 3rd place on the Bundesliga all-time top scorers chart with 221 strikes. The tally is only bettered by Gerd Muller (365) and Klaus Fischer (268) but Lewy commands respect having overtaken Bundesliga greats like Dieter Muller, Jupp Heynckes and Claudio Pizzaro.

Robert Lewandowski is arguably a deal of the century player and no doubt a deal of the decade. At just €4.5 million, the Bundesliga has been treated with 221 strikes, 63 assists and some breathtaking football.

Bayern Munich will forever be grateful for landing such a prolific goal scorer for free and Borussia Dortmund a little less so for shelving €4.5 million and losing him for nothing. However, the German fans have enjoyed a true spectacle watching arguably the best striker in the league in the last decade torment teams from around the continent. From scoring four times against Real Madrid in the Champions League to scoring 5 times in a span of 9 minutes against Wolfsburg on September 22nd 2015, Lewandowski has always had a special package for the fans in his locker.

The Pole is unlucky to be playing in an era defined by stratospheric football achievements of Messi and Ronaldo but his goal scoring prowess must be respected. At 31 years of age, Robert has over 440 career goals in a league that plays four games less than the other top four European leagues every season. Many have argued that the typical number 9s are a dying breed but it is hard to look at Lewandowski agree.

The Pole is a leader, a consummate professional and a positive influence on the team. His fitness, mentality and work rate have endeared him to the club management and fans alike. One day, Robert will retire from the beautiful game and the Polish national team will never look the same.

Related Itemslewandowskilewandowski bayern
← Previous Story Why Football Is Beneficial For The Kids
Next Story → Bournemouth: Can Howe drag his Cherries out of the drop zone?