Arsenal: A Season Review, So Far 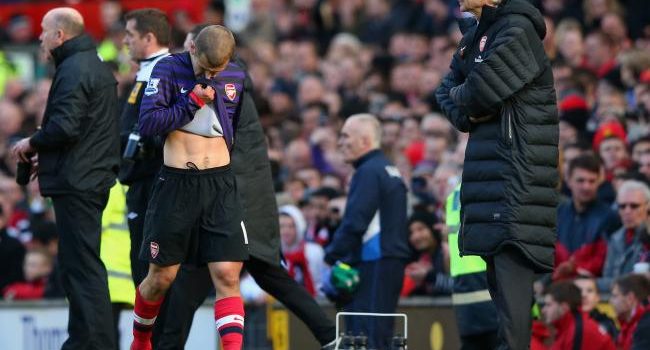 Arsenal: A Season Review, So Far

“Judge us with ten games in.” - Arséne Wenger, trying to calm his critics. We’re ten games in now, and it’s looking rather grim for Wenger’s boys in red. After a disastrous last fortnight, even Wenger’s admirers are starting to doubt him. A new-look Arsenal team marched out of the tunnel at the Emirates, in what would appear to be a relatively simple game, at home to Sunderland.

The colossal presence of ex-talisman, Robin van Persie, was sorely missed, as replacement Olivier Giroud missed missed out on the mouth-watering prospect of a debut goal, missing from point-blank range. This led to an extremely frustrating 0-0 draw, where Arsenal controlled the majority of the game. This was a very disappointing result for the Gunners, as most fans expected relatively new team to click well, and play brilliantly, like they showed in pre-season.

Next up, a formidable trip to Stoke’s Brittania stadium. A place where Arsenal usually struggled to deal with the long-ball play adopted by Stoke manager, Tony Pulis. Arséne Wenger described their style of play as “rugby football”, and boldly continued with “they kick teams off the park”. As a result, there’s no love lost between the two managers, or Stoke fans’ relationship with the Frenchman.

Arsenal started the game brightly, with a few half-chances, but as the game went on, it started to look like an agonising repeat of the home draw against Sunderland. Arsenal created very little chances in the game, and Arsenal fans were worried, with a trip to Anfield next. It finished 0-0.

Arsenal, still yet to concede a goal, went to Liverpool looking for their first win of the season. Arsenal looked to have created something  They were playing the Arsenal tiki-taka style again. The prevailed from north Anglia with three points, signings Lukas Podolski and Santi Cazorla combining for both goals, the latter scoring the second and the former the first. There looked to be light at the end of the tunnel, as Arsenal utterly outplayed Liverpool. Arguably the biggest positive of that game, was 90 minutes to Abou Diaby, who played an amazing game in the midfield that day. Per Mertesacker also bloomed, marking Liverpool’s biggest threat, Luis Suarez, out of the game.

After Liverpool was promoted side Southampton. An in-form Arsenal came into the game confident, and it amazingly showed. Arsenal destroyed the Saints 6-1 in a delightful game of football. Struggling Southampton were stunned at what they saw in front of their very own eyes.

The return of the Champions League was extremely refreshing for every Arsenal fan, and to add on, Spurs aren’t in it! (Had to say that). They traveled to France to face the French Champions and Olivier Giroud’s old club. The French striker was still waiting for a goal, and many thought that this was the perfect time to get it. Arsene Wenger opted not to start Giroud, though, which is why he was still waiting for his long goal drought to come to an end. Arsenal, unbelievably unconvincingly won the game, but the three points gained were important ones. Arsenal’s side that day showed great character to come from 1-0 down, although they were extremely lucky that Montpellier didn’t finish their chances.

Arsenal then traveled to Manchester, to face English Champions Manchester City. The Gunners were high-flying, and against City, Arsenal played really well. They missed many a chance, and paid for it, when Steve Bould’s zonal-marking technique was smashed to pieces by Joleon Lescott’s header. Arsenal carried on outplaying City, and when Gervinho was put through on goal, he cocked up his first touch into the hands of Joe Hart. It took until the 82nd minute, when center-back Laurent Koscielny, netted home the equaliser. It finished 1-1, but most Arsenal fans were extremely bitter they didn’t pick up all three points.

The next task for Arsenal was hosting Coventry. The young guns massively impressed in a 6-1 drubbing. Theo Walcott shined, and importantly, Olivier Giroud got his first Arsenal goal. Arsenal were flying high, unbeaten.

Next for the Gunners, though, a very threatening task to keep this run going: Chelsea at home. Arsenal struggled a lot, and Chelsea were the better team to start off with, and deservedly Chelsea took the lead. Fernando Torres bullied centre-back Laurent Koscielny when he poked past goalkeeper Vito Mannone. Arsenal needed a goal and started to get in the mood with halftime looming, but with two minutes before the break, Gervinho scored to put the teams on level terms in the interval.

Arsenal started slowly in the second half, and when skipper Thomas Vermaelen gave an unnecessary free-kick away, Juan Mata pounced and found the corner of the net. Arsenal failed to score again, with Koscielny hitting the crossbar, and multiple shots coming in, but deservedly, they didn’t pick up a point from the game and their unbeaten streak was put to sleep. It finished 2-1 to the Blues.

In round two of the Champions League, Arsenal were slow to get out of the blocks against Olympiakos. The Greek side pounced, and quickly equalized just before half-time after dominating for large portion of the first half. Arsenal fans were very worried as was Arsene Wenger, and rightly so.

In the second half, Arsenal came out quite well, scoring two goals with a relieved Aaron Ramsey finishing off the game. The Welshman is criticized by Arsenal fans, but this neat finish helped him redeem his status at the club.

Then Arsenal travelled to Upton Park, to face West Ham. They controlled the tempo of the game very well. West Ham were lucky to be in the game. In Arsenal fashion, though, Mohammed Diamé put the Irons ahead with their first shot on target. Arsenal needed to win this game, and replied very well. Olivier Giroud added another to his tally of Arsenal goals, before Theo Walcott put the Gunners ahead and Arsenal’s star-man Santi Cazorla thumped one into the onion bag. Arsenal were doing very well, going into the international break…

After representing their countries, Arsenal came back to a game against Norwich away. Arsenal, in the form they were in, definitely should’ve won. It was the worst performance from an Arsenal team in my recent memory. It seemed that the international break had interrupted Arsenal’s season, where they failed to get a shot on target. Arsenal fans didn’t know what to think after this performance from their team. It was utterly woeful. To add to the misery, starlet Alex Oxlade-Chamberlain picked up an injury.

After this unorthodox match, Wenger’s army hosted Schalke 04 of Germany in the Champions League, where unbelievably, they lost 2-0! Yet again, the players all looked tired, docile and lacklustre. Arsenal fans all over the globe were left gobsmacked. Shell-shocked. They were wondering what a few international games had done to their team.

Arsenal needed to stop the losing streak they were on, fast. Next was struggling QPR. Arsenal showed glimpses of the team that played against Liverpool and Southampton, but it still wasn’t quite there. Notably, since Abou Diaby picked up an injury, Arsenal started to struggle. Nevertheless, they added three points to the board, in a 1-0 win, a game in which QPR keeper Julio Cesar shined. Still, though, it took an offside Arteta goal to beat the relegation candidates.

In the next round of the Capital One Cup, they played Reading away, and wow, this has got to be the weirdest game of football I’ve seen in my life. Arsenal won in an unbelievably high scoring game, coming from 4-0 down, to score in the last minute taking it to extra time. This was extraordinary in itself. Arsenal went 5-4 up then, until Reading went on to level terms. Walcott got his hat-trick to put the Gunners into the lead, and Chamakh, yes Marouane Chamakh, completed his brace. I repeat Marouane Chamakh scored a brace.

Arsenal won 7-5, and in complicated yet amazing style, Arsenal prevailed to the quarter finals.

With two wins on the spot, a hard trip to Old Trafford was on the cards. This was the first time Robin van Persie [pursestrings] played against his old club, the club who believed in him through difficult times. Inconsistent skipper Thomas Vermaelen made a mistake to let van Persie open the scoring, and to be fair, the Dutchman didn’t celebrate. Arsenal were woeful, and lucky not to go further down when Rooney missed a penalty. Manchester United were on top for the whole game, Arsenal just did not turn up.

When Evra got a second, everyone thought it was game over, and they were proved to be right despite Cazorla scoring with the last kick of the game. Arsenal didn’t deserve to win, and didn’t. It finished 2-1 to the Manchester side.

I’d like to add, that despite a shaky start, the answer is not sacking Arséne Wenger. Keep believing, Gooners. This season isn’t over yet.